A lot of survival TV shows are fake. But one of my favorites is History’s Alone, in which 10 contestants (14 in Season 4) are dropped off in the wilderness and compete to see who can survive the longest while isolated. The show is now in its eighth season, which you can watch on Netflix or Hulu.

In the mold of Survivorman’s Les Stroud, contestants operate their own camera equipment. And they are allowed only 10 items to help them survive as long as possible. They are also provided with a GPS phone they can use to call for help or throw in the towel. The last person standing wins $500,000 ($1 million in Season 7).

Alone might be the most grueling game show of all time. The winners are proven survival experts and even the runners-up are no slouches.

So I wanted to analyze the gear top contestants chose for their 10 items. Maybe it would inspire something different in my personal bug out bag list?

And this was a cool way to play with The Prepared’s kit builder tool, a prototype we’ve been building as a side project to help organize personal inventory and kits. You can even clone any of the below kits, then modify them to make them your own!

What are the most popular items among Alone contestants? 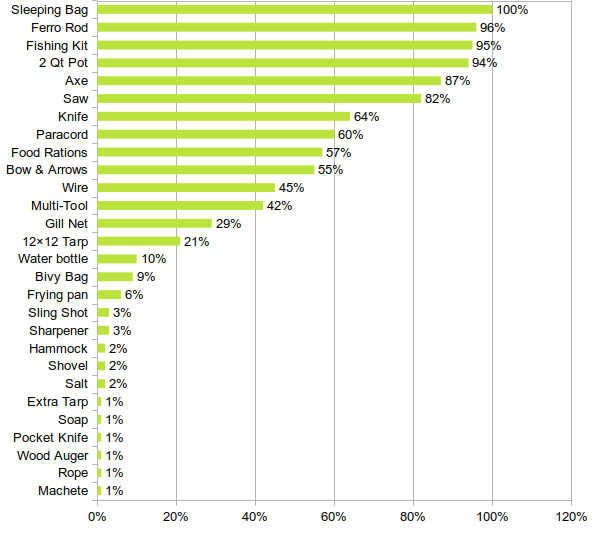 Review: The Stanley Cook Kit is a great fit for a go-bag

Learn how to sharpen your blades in the field with TP’s online video course.

The challenge: figuring out the exact gear used by Alone’s winners

The show never details the contestant’s items, but the show says you can see what 10 items each participant took with them at History.com. Unfortunately, they don’t list the exact items, brands, and models — they just list the general items, like “saw.”

After consulting many different resources and spending over 27 hours on research, I’ve compiled the most accurate and comprehensive list of the 10 items that the winners and runners-up used. Sometimes, I was able to find the exact item that the contestant used, and other times I had to make educated guesses using video clips from the show. Each item is accompanied with any information I found on the item, prices, and weights.

What gear the champions brought

If we limit the data just to the 1st and 2nd place winners, here’s what they brought: 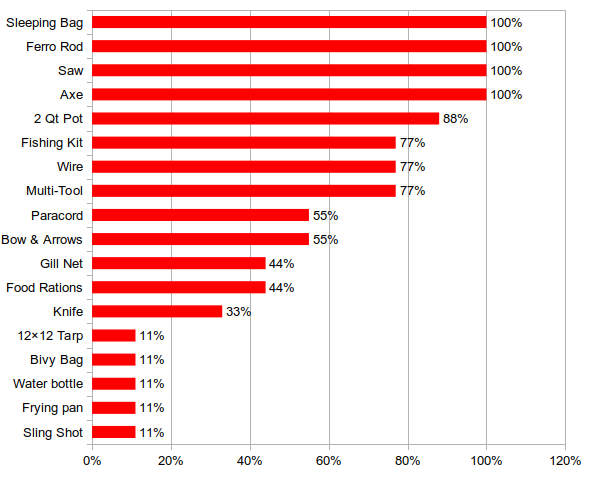 Every finalist had (compared to all contestants):

To date, no one has won Alone without those four items. And the vast majority also brought:

This data isn’t as iron-clad, and a contestant’s choices could be directed by preference. But there are some clear patterns — many more winners brought multitools compared to the broad contestant pool, for example. The winners are probably better at using versatile tools like multitools and wire for a wider range of needs, compared to something specific like a fishing kit.

And you might notice that the items I pulled out above add up to 10. So based on the statistical preferences of Alone’s winners, here is the “perfect” kit:

But remember, there are three types of lies: lies, damn lies, and statistics. Don’t take this as strict survival advice — the mix of gear that makes the most sense for an Alone situation is not the same as the best mix for a general go-bag — but as far as minimalist kits go, you could do a lot worse.

Alan Kay and Sam Larson came out on top on Vancouver Island.

Alan had some interesting items in his kit, including a bow saw, water bottle, gill net, wire, and a kukri. Between the saw, a Fiskars Axe, and the kukri, Alan loaded up on cutting tools.

Sam’s kit was a bit more conventional. He also loaded up on cutting tools, with an axe and knife, along with a tarp, bow and arrows, and pemmican. Sam made the axe handle and arrows himself.

David McIntyre was the second contestant to conquer Vancouver Island, and this is what he brought:

Like Alan Kay, he brought a gill net. He also doubled up on sleep with an Army bivy bag and a mummy bag. He also tripled down on cutting tools with a knife, axe, and saw.

Runner-up Larry Roberts also emphasized cutting tools, with a knife, axe, and saw. In addition, he brought a gill net and extra rations.

Fowler had some unique items in his kit, including a Spetzsnaz shovel, slingshot, and multi-tool. Fowler made the slingshot himself and painted the ammo pink so he could easily recover it. Smart! (A season one contestant bailed after losing a black ferro rod.) Like many winners, Fowler loaded up on cutting tools and he brought along some multi-function Titan paracord.

Largely standard stuff: multiple cutting cools, a water bottle, etc. But Fairchild doubled up on emergency rations with a bag each of rice and beans. Those are two of the best foods you can stock up on for preparedness.

Season 4: Jim and Ted Baird and Pete and Sam Brockdorff

In Season 4, Alone returned to Vancouver Island, but mixed things up with pairs of family members. Brothers Jim and Ted Baird had a most excellent adventure with this kit:

At this point, there are some clear patterns, such as a full stock of cutting tools and fishing gear. An interesting item in the Brothers Baird kit is the Samick Sage takedown bow. We think there are better-suited survival bows on the market (the Sage is more for competition), but who are we to argue with success?

Father and son Pete and Sam Brockdorff took a fairly standard kit, but doubled up on tarps and brought some rations.

Sam Larson returned from Season 1 to conquer the wilds of Northern Mongolia. His Season 5 kit was considerably different than his first:

The only commonality was the ferro rod. He exchanged the canvas sleeping bag for the heaviest sleeping back he could find, traded the DIY axe for a Hults Bruk, and swapped pemmican for two pounds of flour and two pounds of trail mix. The most interesting change was the addition of a relatively heavy 2-quart enamel pot. He also brought along a Leatherman multi-tool.

Season 5’s runner-up was Britt Ahart, a contender from Season 3. He brought along a Leatherman Wave and a Samick Sage bow.

Jordan Jonas is one of Alone’s most impressive champions, managing to slay a 408-pound moose with a takedown bow, dress it with a Leatherman multi-tool, and kill a wolverine with his trusty axe in the wilds of Northern Canada.

Jonas later told Joe Rogan that if he had it to do over, he would have traded the saw for a gill net because he almost never used the saw. He managed to fashion a net out of paracord.

Runner-up Woniya Thibeault had an interesting and brightly colored kit that helped her hold out for 73 days.

Roland Welker survived 100 days in Northern Canada with a mostly standard kit, but with an interesting addition: a giant crosscut saw that he intended to build a log cabin with.

Alone’s third woman runner-up, Callie Russell, survived 89 days with another fairly standard kit with her own twist: a homemade Osage bow with a wool quiver.

Clay Hayes survived near Chilko Lake in British Columbia for 74 days. His 10 items closely resemble the top items chosen by the other seven winners before him.

Runner-up, Biko Wright had to tap out after developing a heart condition because of lack of nutrition. On the plus side, he was able to get home and witness the birth of his two twin daughters.

Juan Pablo survived in Labrador, Canada for 78 days. He conserved calories by fasting for long periods at a time and drinking water straight from the river so he didn’t have to expend energy keeping up with a fire and boiling it.

Runner-up, Karie Lee left because of starvation and exhaustion after 75 days but had one of the most positive attitudes for those 75 days.