Emergency ration blocks are great as the “first line of food” in your portable go-bags and car kits for the same reasons they’re used as lifeboat rations. In this review, experts recommend sticking with products from government-approved companies, namely Datrex bars and SOS bars.

Ration blocks have sturdy packaging, cram in a lot of calories and nutrients in a small package, can withstand extreme temperatures without melting, and shouldn’t make you thirsty. They have a long shelf life, usually around five years, so you can toss them in a bag and not worry about them for a long time.

That’s why this style of food bar is used for lifeboat rations. It’s easy to imagine what groups like the US Coast Guard would look for when picking the only food available in a lifeboat:

Those qualities are the same reason why these ration bars are a great fit in your portable go-bags and car kits. For example, it’s always a challenge keeping a little backup food in your vehicle because it can really bake when sitting in the sun. Or you might not have the time or resources to reconstitute a freeze-dried pouch.

Although there’s freeze-dried survival food kits (eg. Mountain House) that are great for your home supplies, and some of those single-serving freeze-dried pouches can make sense in a go-bag, these nutritionally-dense food bars are great when you need easy, fast, and always-available calories.

The most important bits when buying ration blocks: 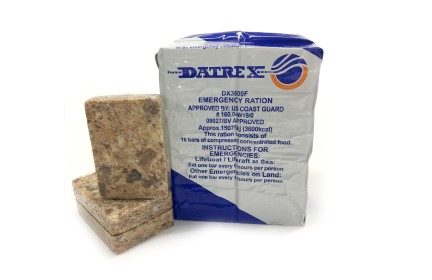 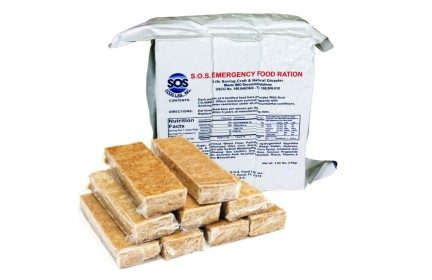 Datrex and SOS food bars are coconut flavored. It’s not a strong flavor, but if you hate coconut, consider the lemon-vanilla flavored ER Bars or the apple-cinnamon flavored Mayday bars.

Besides flavor, you wouldn’t notice much of a difference between these top contenders. Datrex comes in smaller 200-calorie servings, while SOS favors 400 per block. Price can be a little tricky to track down since some of these companies only sell in bulk to distributors / ecommerce stores (eg. Mayday), who then sell individual packs.

We recently experimented with baking ration blocks to see how they would hold up to high temperatures. We tested the Datrex and SOS bars and found that the Datrex bars held up a little better to the heat than the SOS bars, but both are great options for your go-bag or vehicle.

As of August 2022, these are the market prices, price per calorie, and overall weight:

Manufacturers approved by the US Coast Guard or NATO

There are four US-based brands and one from the EU, the latter of which is hard to find in the US. Some manufacturers don’t sell directly to consumers, so you have to buy from resellers instead.

There are makers who claim to build to “Coast Guard standards” without actually going through the independent certification process. If you want to check those out:

What are ration blocks made from?

Expect enriched bleached wheat flour or some sort of sweetener to be at the top of the ingredient list, followed by palm oil and a long list of vitamins. There are usually other miscellaneous ingredients, but these are essentially vitamin-enriched and durable blocks of sugar.

Wheat is a great survival food because it’s dense in calories and nutrients, but has a poor shelf life once it’s ground into flour. It’s bleached to remove the bran and germ that encourages spoilage. Unfortunately, that’s also where a lot of the nutrients are, so the bleached flour is enriched to add back some of those nutrients.

Palm oil is used because it is calorically dense, solid at room temperature, and makes a great food binder to hold everything together. Finally, sweeteners like sugar and corn syrup add much-needed calories and taste. It’s not health food, but it will keep you alive. If you’re diabetic or have a severe gluten sensitivity, you might want to favor other options (like freeze-dried pouches). If you stick with ration bars, be sure to eat some before an emergency to see how you react.

Most of these blocks also contain soy, which is a concern for some. Datrex is the only ration bar we’ve seen that does not contain soy.

Because ration blocks are designed with lifeboats in mind, standards are governed by maritime organizations, such as the United States Coast Guard (USCG) and the International Maritime Organization.

The International Convention for the Safety of Life at Sea (SOLAS) is an international treaty that sets standards for maritime safety, including ration blocks. The actual SOLAS requirements are rather vague:

In short, this is the bare minimum you should expect from a ration bar: you can eat it, it should be sturdily packaged but accessible without much fuss, and the package needs to have a clear expiration date on the outside.

However, since SOLAS is just a treaty, it doesn’t approve of ration blocks. Here in the United States, that job falls to the Coast Guard, which has much more stringent standards and requires laboratory testing — for example, they’ll perform “tumble” tests in a lab to see if the food holds up under physical stress. Additionally, specific ingredients are of concern:

Marine survival rations are intended strictly for short-term survival situations at sea, and not necessarily as a long-term, well-balanced diet. The primary concern is to reduce water uptake, since fresh water is limited in a sea survival situation. Therefore, salt and protein content should be low. Carbohydrate provides a source of energy readily usable by the body, therefore it should be a high percentage of the provision. Since fats can contribute to rancidity, they should be limited to the amount needed for binder and palatability.

Finally, ration bar composition should look like the following:

Salt and protein are to be kept to a minimum so as to not provoke thirst. That is crucial when bugging out, when water may be difficult to acquire. Also, fats are to be limited because they can go rancid.

How to tell if a ration bar is Coast Guard approved You’re presented with a list of ration blocks approved by the Coast Guard. Pay special attention to the approval number, which is tied to a specific product. A trick I will often do is to copy the approval number and paste it into Google. More often than not, that takes me to the correct product.

NRG-5 Emergency Rations: What do you think?