When you go to the store and have some wiggle room in your budget, just buy a little extra of the same shelf-stable stuff you already use. You then make a small change to how you store that stuff at home. That’s it! In the end, you’ve leveled up your preparedness without actually spending extra money or time on ‘prepping.’

The FIFO (first in, first out) model is a core concept in prepping and something everyone should understand. It’s so simple and powerful that, for many people, it becomes such a normal part of their thinking that they aren’t even aware of it anymore. Once you start, it seems silly to stock everyday essentials any other way.

The goal is to build up a natural surplus of extra stuff that you already use in normal life but can last at least a few months in storage — namely non-perishable food and daily consumables like toiletries or batteries.

Those extras are part of your first layer of emergency supplies. It’s kind of like having a corner convenience store in your own home. Except it’s only stocked with the stuff you know you want.

And since one of the first steps for a new prepper is to have enough supplies in their home to survive for at least two weeks on their own, without leaving — no outside help or trips to the store — this is an excellent way to get into prepping without much fuss or money.

It’s only in recent decades that we’ve changed our habits to assume that we can always buy whatever we want, when we want, and it will arrive quickly. After all, generations as recent as our grandparents naturally followed the FIFO mindset because they had no other choice. It was just… normal.

You might dip into those supplies due to a sudden layoff, natural disaster, or in longer-term emergencies such as sheltering in place during a pandemic (remember COVID and toilet paper?), disruption to the food supply, or SHTF. Some people use this model just because life gets busy sometimes and already having what you need at home can save anxiety and trips to the store.

Let’s walk through a food example using cans of soup since they have a long shelf life and are great for prepping.

And after becoming a smart prepper:

The longer something lasts between the time you buy it and when it expires, the easier this gets. That’s why FIFO mostly applies to shelf-stable food (eg. a bag of rice or box of pasta) and consumables (eg. batteries or deodorant).

Let’s say a typical can of soup lasts for two years on a shelf. Since you normally eat soup twice per week, that means you could have over 200 cans of soup in your supplies yet never waste any money on things that expire or you never use! (2 per week x 52 weeks x 2 years = 208)

Even if you got up to just 30-40 cans on hand, that alone is enough to cover your minimum preparedness goal of two weeks of self reliance.

Following that model means you became better prepared than 95% of people and can handle most emergencies without spending any extra money specifically on “prepping” (since you spent it on the stuff you normally use anyway), having to change your core likes and habits, or learning new skills like canning and freeze-drying.

Life gets in the way? No problem. Tight budgets or even just a busy schedule are less stressful because you already have some extra buffer and it’s easy to skip or lower your new purchases until you’re ready to start building surplus again.

For example, if your car breaks down and you’re facing a choice between repairs or food for the week, you can buy less at your next supermarket trip, or even nothing at all, because you know you’ve got those extras at home and can pick the FIFO cycle back up later.

More: Personal finance is one of the most important parts of prepping — here’s some tips for normal people

It’s no biggie if your habits change (eg. you don’t like that brand of toothpaste anymore) or something accidentally expires before you use it. Most of these items are cheap and many of them can be donated. Local charities or homeless shelters are usually happy to take extra toiletries and durable food, even if they’re just past the expiration (which is more of a soft guideline anyway).

Keep a permanent marker near your pantry. When you buy something, write the expiration date directly on the packaging. Some people like to write the purchase date, too.

If you write the expiration date in the YYMM format, it’s super easy to follow the FIFO method because you always pick the item with the lowest number on the box — think of it like having your number called in a waiting room where the lower number goes first. Multiple sizes available. Built well for the price. Customizable can widths. Can stack and extend.

Even if you just have a flat shelf or plastic tote, try to pick which area is the front and where’s the back — ie. where you take something to use or put something new you just bought. Shelving that you can access from both ends makes this much easier!

Gravity can be helpful for more advanced setups, especially for round things like cans.

There are pre-made products that do this for you, such as the Shelf-Reliance FIFO can organizer linked above that we personally use and like. Many people make DIY systems out of wood or shelving that accomplish the same basic thing. You put the newly-purchase item at the top, and as you pick out items to use from the bottom, everything rolls down. 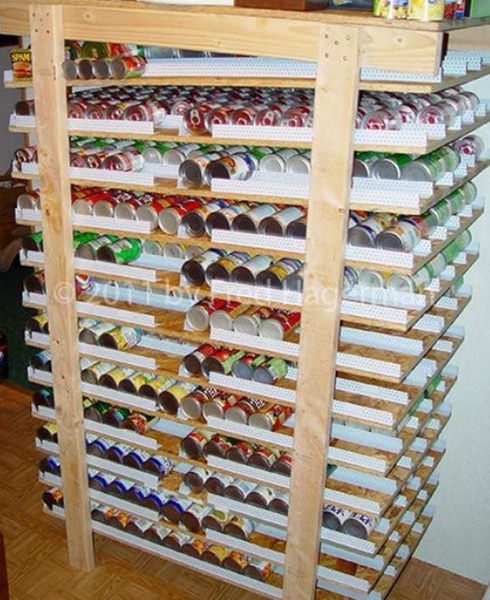