It’s hard to think of another prep that fits as much critical functionality into as small of a package as a great multitool, which is why it’s one of the four edged tools everyone should have. Most of the best multitools in our review hold between 10 and 18 common tools, helping you with a wide range of survival and daily tasks such as: cutting boxes, fixing an engine, building a shelter, creating a trap, sharpening a knife, sparking a fire from a ferro rod, or removing a hot pot from a campfire.

The best multitools are so handy that many people carry one every day (“EDC” for everyday carry) as their primary “I always have it no matter what” tool.

Even if you don’t EDC a multitool, you should have at least one in your home supplies and ideally another one in your emergency bags. You’ll want to keep your multitool on your body as much as possible during an emergency — typically in a pocket or on a belt — because if you lose your bags, the multitool is one of the things you’ll miss the most.

Multitools are also great in urban or more sensitive settings because they’re a non-threatening way to carry a pocket knife. It won’t freak out your office mates if you pull out a multitool blade to open a package or use the screw bit to disassemble the crappy copy machine. 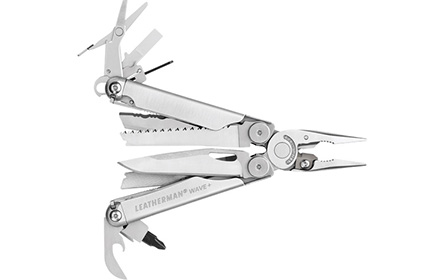 For over 20 years, the Wave has been the multitool by which all others are judged. The new Wave+ has 17 tools in one compact, durable package.

The best multitool for most people is the $110 Leatherman Wave+, an 18-tool, category-defining best-seller that has the right mix and number of tools preppers want, and none of the extra stuff you don’t need. Some preppers find it to be a little heavy and bulky for an everyday carry (EDC) tool carried in the pocket, but it’s right at home in a purse, briefcase, bug out bag, or get home bag. Regardless of your environment (urban or rural) or movement scenario (bug in or bug out), the Wave is the right fit. Everything that's awesome about the category-defining Wave+, but with a super steel knife blade and comfortable, lightweight Titanium handle scales.

A worthy upgrade is the $195 Leatherman Charge+ TTi, Leatherman’s premium multitool offering that’s basically an upgraded version of the Wave+. The 19-tool Charge+ TTi’s knife blade is made of a super steel, S30V, that you find on high-end custom folding knives. We like the titanium handle slabs for their combination of comfort, durability, and low weight (a little under half an ounce lighter than the Wave+). The 19-tool Charge+ adds a sharp hook for cutting straps to the back of the 420HC serrated saw blade, but otherwise the tool mix is the same as the Wave+.

One of the main attractions of a mulitool is that you get compact versions of two of our four core edged tools — a saw and a knife — in the same package.

Some people do EDC a full-sized product like the Wave+ or Charge+ TTi. But a saw blade and other less frequently used tools can add a meaningful amount of bulk, which causes some people to prefer slimmer, sawless multitools for EDC as a compliment to the full-sized tool kept in their emergency kits. The knife on this multitool is so great, it's essentially a high-end pocket knife with 6 more tools rolled into it. The EDC king of the hill.

For preppers who want something more compact and discrete, we like the 4-inch, 5-ounce $90 Leatherman Skeletool CX. We’re recommending a premium version of the standard Skeletool because of its superior materials. The extra $15 over the standard Leatherman Skeletool gets you a 154CM steel knife blade that’s a wonder of ergonomics and durability, making the seven-tool CX less of a multitool and more of a “high-end pocket knife that happens to have pliers, a bit driver, and some other tools.”

The other way to EDC a multitool is to select a Swiss Army Knife (SAK), preferably a legit, Swiss-made one from Victorinox. Before the Leatherman took over this space in the 90’s, the SAK faithfully served generations of campers, soldiers, scouts, and outdoors people, and it’s still an amazing option for those who don’t need a large set of pliers or wire cutters on their multitool.

The best EDC Swiss Army Knife is the $43 Victorinox Evolution 18, a modernized version of the classic SAK that features a locking knife blade for added safety. The Evolution 18 has many of the core tools preppers look for, without any of the goofy stuff like corkscrews or hooks. It’s compact enough to slip in a pocket, durable enough to withstand years of abuse, and capable enough to get you out of a jam.

You can trade away durability, versatility, and ease of use for more compact options — even so far as to carry one on a keyring, in a watch pocket, or as a belt buckle. SOG has fit 11 nearly full-sized tools into a 3-inch, 5-ounce gadget that can easily be tucked away in a pocket or purse for all-day carry.

The best mini multitool is the 3-inch, 5-ounce $80 SOG Sync II, a collapsible gadget that’s actually designed to be worn as a belt buckle (although such use isn’t at all required). The Sync unfolds into a nearly full-sized 11-in-1 multitool, with pliers, knife, awl, scissors, and more. Elegant design and outsized functionality have made this tiny tool a giant of the EDC world. Beautiful, simple, tough.

For preppers who are looking to stay within the SAK family, the $30 Victorinox Classic Alox is one of the most well-loved products in the EDC scene. The high-grade oxidized aluminum handle scales enclose a minimalist but capable mix of basic tools: knife, scissors, nail file, and screwdriver. You can do a lot with just these few tools, plus it’s a treat to carry an important work of functional art that is to the EDC crowd what the Eames Lounger is to furniture aficionados.

Travel multitools you can take through TSA

If you travel often and need TSA compliance, consider the $35 Leatherman Style PS. It includes pliers but omits the knife blade that would otherwise freak out airport security.

“One-piece” multitools are so simple and small that you can carry one like a credit card. The $7 Gerber Shard is the best one-piece multitool on the market right now — great value, the right functionality, and TSA compliant. The Shard is a 7-in-1 tool cut from a single piece of steel, then coated for corrosion resistance. It features a flat head for prying, three types of screwdrivers, a wire stripper, bottle opener, and lanyard hole, so you get a lot for very little money and bulk.

Picking the right features in a survival multi tool

As is the case with most gear categories, there is no such thing as a tactical multitool. But “tactical” is often a marketing shortcut in the same way “survival” is: it represents a set of features optimized for those kinds of situations, as opposed to a product optimized for something like auto repair.

You don’t need features like corkscrews. Here are the common multitool functions we care about in an emergency and prioritize when picking a product:

Knife blade: For opening boxes, carving, cutting, and many other tasks too numerous to list.

Serrated knife blade: Works best for fibrous material like cordage, seatbelts, and straps. It’s hard to sharpen, so use it sparingly.

Pliers: These have more wilderness survival uses than you might think, such as picking up a metal pot of boiling water or other hot object from a fire, holding a piece of work you’re hammering to avoid hitting a finger, twisting a bent tent pole back into shape, or removing a fishhook.

File: On the Leatherman tools we’ve recommended, one side of this tool is diamond-impregnated and can be used as a blade sharpening stone, while the other side can make short work of wood and metal. A file can also be used for striking a ferro rod, although it does take a lot of metal off and is not recommended for this purpose.

Can opener: Finally, a good excuse to use this classic prepper cartoon! 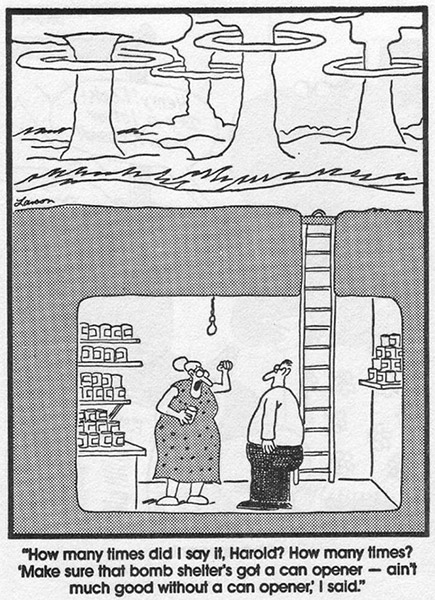 Awl: Technically it’s for stitching, but it works great for drilling or poking holes in just about anything soft.

Large flathead screwdriver: In addition to working with flathead screws, this tool can also be used for scraping, chiseling, and some light prying.

Bit driver: The ability to swap bits adds a whole new dimension of flexibility to a multitool. You can buy extra bits and customize them by shaping them with a file, enabling you to add tools like a punch or an awl to your multitool.

Most people report that moving up to the very large, “heavy duty” multitools, like the $140 Leatherman Surge, doesn’t offer enough added capability to be worth the significant bump in price and bulk.

We also suggest avoiding overly specialized products, like the many multitools that are focused on firearms or military needs. Even if you have firearms as part of your preps, the gun-specific multitools are often overpriced for what you get and generally can be skipped unless you’re experienced enough to have a predetermined reason for one.

What do you carry with you every day? and how?

Best equipment for survival from EDC to SHTF

My EDC - what am i missing