The importance of knowing your way around

Sorry this is such a long post.  The idea was inspired by a recent thread about roads vs interstates, and then again in a thread about cost-free preps.  It got so long and specific it felt like it should be its own topic…

One incredibly important aspect of prepping, in my opinion, is becoming keenly familiar with the road and highway system in one’s town and region. Too often people rely on their phones and navigation devices to get them from point A to B, and it seems to me a real, yet avoidable, vulnerability. While such devices can be great for avoiding traffic jams and road closures, it’s a real fool’s errand to rely on them completely. Networks can fail or get overloaded, devices/batteries can die, and it wastes time to type in/search for your destination – all things you want to avoid during an emergency.

An important (and free!) prep is getting to know your way around your immediate area and region. Knowing how to get yourself to nearby hospitals, your bug-out location, or simply out of town – without having to reference a map or a device – is a crucial prepping skill. Once you have those routes memorized, then work on a secondary route, and perhaps a third, recognizing that roads/passes/bridges could become un-passable and require you to take an alternative route.

From there, getting to know your area’s transportation system is vital. Highway systems are called “systems” for a reason, and while they might not always make obvious sense, upon studying them they reveal themselves. Additionally, there are all sorts of embedded codes one can learn to aid this process (for instance, with the US Interstate System, odd numbered highways always go north/south, while even numbers go east/west (this is a pretty well-known example, but these sorts of codes go much, much deeper). The road and highway numbering system in the US can be extremely useful once you understand it. The same can be said for most urban grids as well, though those vary town to town and are much harder to memorize beyond your immediate region. There are several websites and resources that shed light on these systems, but here’s a good place to start: https://www.fhwa.dot.gov/programadmin/interstate.cfm

Another important thing to understand is the natural geography and barriers that inhibit our road system.  Rivers, bodies of water, mountains, etc, play a significant role in how we get around, making bridges and mountain passes natural chokepoints that can bottleneck traffic.  Recognizing these chokepoints is vital when making decisions, especially when evacuating an area.  For instance, if you are trying to get from Oregon into the state of Washington, or vice versa, you will have to go over one of nine bridges over the Columbia River spread out over 300 hundred miles.  Knowing where all nine of those bridges are, and the distance between them is vital if one hopes to make good decisions in case the preferred route becomes inaccessible due to structural failure or impossible gridlock.

I highly encourage anyone who imagines needing to flee a disaster to spend some good time studying maps and trying to memorize the road system of their area.  Accompany this with going for day trips to test your knowledge (and do some exploring, which is fun!).  While out, try not to look at maps too much, or if you do only use paper maps and a compass (no devices!).  Familiarize yourself with landmarks, and try to keep tabs of your internal compass (ask yourself periodically “which way is N/S/E/W?” and try to keep tabs on that).  If you get lost try to figure it out, it can be fun with the right attitude, and you just might find your new favorite place.

Our GPS navigation devices can be great tools, but don’t allow them to inhibit you from forming a true understanding of your surroundings. Be ready and familiar with paper maps and analog navigation tools, but challenge yourself to committ as much to memory as possible.  If you are fleeing a hurricane, or rushing your kid to the ER, relying on your digital navigation devices could slow you down and do more harm than good. How to read maps 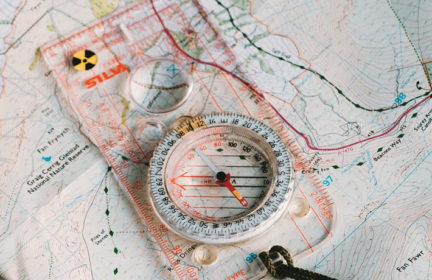