The electrical grid, GPS system, and cell networks are all fragile and can fail quickly in emergencies, much less a SHTF situation. Or maybe you simply don’t have access to a phone/device when you need it. That’s why it’s important to keep a stock of paper maps handy and know how to use them.

Tip: Maps can be more useful than people expect, especially as more of us are growing up without ever needing to actually use a map for figuring out where we are, plotting a course, or finding water. Learn more about how to read a map and how to use a map and compass The gold standard in atlases, with an additional protective cover. Another quality atlas, with spiral binding and bright colors.

Map types you should buy

For personal preparedness, there are a few core map types that make sense to focus on first:

You may also want maps of cities near you. Both national and state atlases omit street-level detail in cities, especially smaller ones. Maps of major metropolitan areas show more detail and often have detailed maps of surrounding towns (they’re produced by different publishers, The Map Shop is a good resource). If a major map publisher doesn’t offer a map for your town, you may be able to obtain one from the city or county government.

Depending on your area, there are other maps you might consider as well:

Paper maps can’t be zoomed in and out, so cartographers have to decide what scale to draw them at. Scale is the relationship between size on the map to the size in the real world. For instance, if the scale is set so one inch equals one mile, you know that if you travel three inches on the map, you will have traveled three miles.

Some maps are not drawn to scale and are usually marked as such with “not to scale” or NTS. That means that while an area has been shrunk down to fit on a piece of paper, there is not a direct correlation between measurement units. These maps are fine for finding your way around Walt Disney World but are not fit for preparedness.

The scale doesn’t just define the relationship between small units on the map and large units in the real world, but it also defines how zoomed in and detailed the map is. A small-scale map shows a larger area with less detail, while a large-scale map shows a smaller area in greater detail. It’s a bit counterintuitive. Just remember large is small and the larger the number, the smaller the scale.

Many road atlases will show a small- or medium-scale map with large-scale callouts of important areas.

In the United States, there are two major producers of national atlases: Rand McNally and National Geographic. Their atlases are extremely similar. Here’s a roundup of differences:

There are other minor differences, but again, they’re both very similar.

For a state atlas, your most consistent choice is DeLorme, a division of Garmin, which produces atlases for all 50 states. The DeLorme maps double as both road atlases and topographic maps. Benchmark makes highly regarded state atlases, but they only cover a handful of mostly western states.

However, even DeLorme’s city views aren’t as detailed as you’d probably like, with smaller streets becoming a tangle of unmarked lines, which is why a city-specific map is good to have on hand.

For other maps, like individual city maps, check out The Map Shop, which sells maps and nothing but maps.

How often should you buy new maps?

Rand McNally and National Geographic update their road atlases every year. New roads are added, old roads are closed, etc., so you want the most up-to-date information. You should replace them at least once every five years or so, but ideally every year.

The DeLorme atlases are less consistent. If you look at copyright dates for the various state atlases, they range all the way from 1999 to the current year. You might check every other year or so to see if a new edition has been published.

As for topographic maps, the terrain doesn’t change very often and the government can take decades to update the data. If you have a map of the area around your home, order a new one if any major changes happen in your area. Otherwise, you should be fine replacing the map when it wears out. Always get a fresh, up-to-date map of an unknown place.

When choosing and comparing topographic maps, it’s important to understand the concept of geodetic datums. Think of these like map languages, and it’s very important to make sure that whenever you compare two maps that you’re speaking the same language.

In the simplest terms, a datum is the model of the earth on which cartographers base their maps. Here are the three most common datums used in United States maps:

It’s very important when comparing maps to ensure that they’re using the same datum. For instance, if you’re referring to a historical map using NAD27 and another party you’re communicating with is using a NAD83 map, your coordinates may not match up at all!

NAD83 and WGS84 are often used interchangeably, and that’s fine for land navigation. However, there are slight differences that make them not interchangeable for precision applications, like land surveying.

There are new datums set to replace NAD83 in 2022, though that may be delayed. For now, NAD83/WGS84 are the most current datums in common use.

In short, you don’t need to know the technical details of datums, just know how to identify them on your map and know which one it uses.

Meet the US Geological Survey

The US Geological Survey (USGS) creates topographic maps of the entire United States. They provide free maps you can print yourself or you can order maps from them for a nominal fee. Many commercial topographic maps are based on USGS maps.

USGS maps divide the United States into quadrangles, each representing 100,000 meters (100 km), presented at 1:24,000 scale (except for some places, like Alaska and Puerto Rico, which are displayed at different scales). They’re called 7.5-minute maps because they represent 7.5 minutes of latitude and 7.5 minutes of longitude.

Searching the USGS store can bring up several types of maps for any given location, but there are two we’re concerned with:

Due to budget cuts over the years, USGS had to abandon field collection of data, which means that while newer maps are compatible with GPS systems, they don’t reveal as much information, such as:

If you have to pick one, you’re better off with the newer US Topo maps, since they use the NAD83 datum and have the most up-to-date information. However, comparing it against a historical topographic map may reveal interesting details not on the newer maps.

MyTopo sells maps based on the historical topographic maps but updates pertinent information and bases them on the NAD83 datum. We’ll cover how to obtain a custom map from them below.

A list of available maps appears. You can click View PDF by a map listing to download a PDF of that map. The most recent maps are marked 2019.

Be aware that these PDF files are very large, 100 MB or more. You can view them in any PDF reader, but slower computers may struggle with rendering the files.

National Geographic also offers free topographic maps, adapted from historical USGS maps and split into quarter-quads to make them easy to print. The maps may have out-of-date details, but they’re a cheap and easy option.

Zoom in on the map in the area you’re interested in mapping. Click the red square near the general area and then click the map in the pop-up, which gives you a PDF of the desired map. The first page is an index with a red outline around the mapped quad. Each quad is marked with a page number. Each page displays that quarter quad. 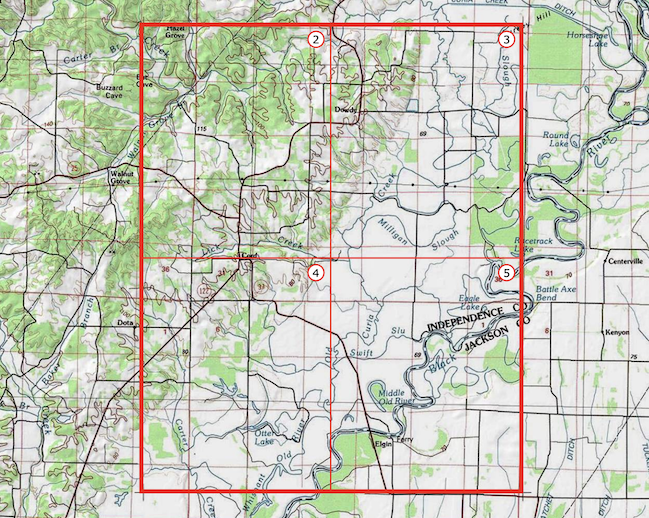 The National Geographic maps are easy to print since National Geographic splits each quad into 8.5×11-inch quarters that you can print on Letter-sized paper on any color printer. If you have access to a color laser printer, it will produce better results. Inkjet printers tend to bleed and make details fuzzy.

You may also consider higher-quality paper. Rite in the Rain makes a waterproof copier paper that works with laser printers (not inkjets!). If you print on standard paper, you’ll want to laminate the map so it isn’t ruined by moisture. There are self-laminating sheets that don’t require a machine, but they’re glossy and thus hard to read in the sun. A better option is a laminating machine or a trip to a copy shop that can do it for you.

USGS maps are much harder to print because they’re 24×29 inches. A print shop should be able to make a print that large, but the best option, if it’s available to you, is a plotter. Unfortunately, plotters aren’t common, but if you have a university nearby with a GIS department, they probably have one and might make a print for you.

However, for maps that size, buying a map from MyTopo is probably a better and more cost-effective option. It will be printed on waterproof paper and pre-folded to fit in your go-bag.

Another option to consider with PDF maps is to carry a tablet in the field, like an iPad or a Samsung Tab. The advantage is you can carry dozens of maps with you in the field without an Internet connection. The disadvantage is that the battery must be charged and the tablet could break.

You can offset these drawbacks with a durable case, like an Otterbox, and with an external battery pack paired with a solar charger. However, you should still have at least one paper map of your area that can’t break and doesn’t require batteries.

T.Rex Arms has published a video exploring these options.

How to order a topographic map from MyTopo

You can download USGS maps for free and have them printed wherever you want, but they have drawbacks:

The National Geographic maps are free and easy to print, but are out of date and only show a quarter of a quad.

MyTopo offers custom USGS maps for a reasonable price, about $20 after shipping. Here are some of the advantages of buying a map from MyTopo:

Update: As of Feb. 2022 the only way to buy a custom map from MyTopo is to call 877-587-9004. Once they finish the site redesign the following instructions should work again.

We’re not sponsored by MyTopo, it’s just a great resource for topographic maps that can fit in your go-bag. However, it offers an overwhelming number of options, so here’s how to order a useful map:

Vacation traveling and bugout bags: How do you pack to stay prepared?

How we can teach children and youth prepping skills