On Christmas Morning, 63-year-old Anthony Warner parked an explosive-laden RV on the usually bustling Second Avenue in Nashville, Tennessee and detonated it. The target is believed to have been AT&T’s “Batman building.”

Because of Warner’s own copious warnings and the quick work of Nashville Metro police, there were thankfully no deaths other than Warner’s, and just a handful of injuries to bystanders. However, the bomb wrecked countless businesses, terrified Tennesseans, and created a days-long communication outage that demonstrated just how fragile our telecom system is.

We live within driving distance to Nashville, thankfully far away from the blast, but close enough that our favorite restaurant, Rodizio Grill, was destroyed and closed indefinitely (the company has set up a GoFundMe for its employees). In the days after, we and many of our friends suffered from communication outages and hiccups. Internet access and cellular service failed for many, even if they weren’t AT&T customers. 911 systems failed, ATMs stopped working, businesses couldn’t process credit cards, and flights were grounded at Nashville International Airport.

People are tempted to take a specific event and figure out how to prepare exactly for that event. But being a sane prepper means knowing that yes, every event is unique, but the things you should learn and do to prepare ahead of time are the same across situations.

Let’s take a look at the events leading up to and following the bombing and how they illustrate the importance of the prepping concepts taught on this site.

Potential signs leading up to the attack

First signs of trouble on the day of the explosion

Rough diagram of where the bomb was detonated and how far it reached. 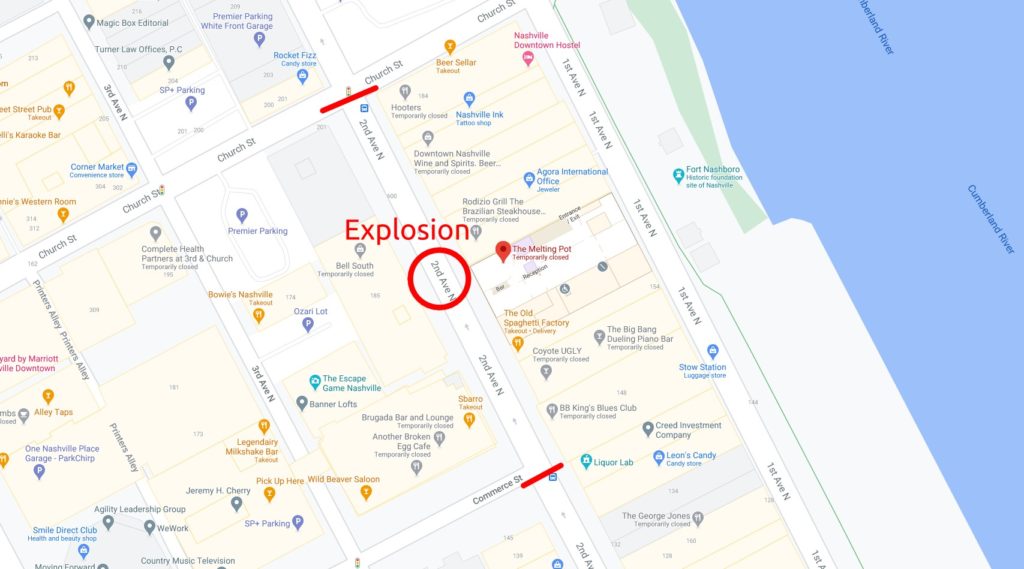 What should you do if you were in the blast area but not hurt?

What should you do if other people are hurt?

What should you do if you’re hurt? Heatmap of communication outages from the Nashville AT&T building outage