What if you need to navigate or simply figure out where you are without the help of GPS? A great compass is a common part of go-bags, but there are a confusing array of options for people who just want to cover the basics and be done with it. After 37 hours of research, including interviews with experienced field instructors, we like the Suunto A-30 for most people.

As is true with most survival gear, the best compass in a survival situation is often “the one you have.” But if you’re buying new, this guide explains what to look for and avoid specifically for emergency preparedness.

Many people will buy a compass, throw it in their bug out bag, and not really use it again until the need arises, for example, and those needs are different than what a hardcore hobbyist would care about when chosing a compass for their weekend recreation.

More: Learn how to use a map and compass in emergencies

There are a lot of add-ons and features available on compasses today — not all of which necessarily make for a better tool in an emergency. Some features found on military compasses, for example, are great when you need to call in an air strike but confusing when you’re an average person just trying to get unlost.

Jessie Krebs, U.S. Air Force SERE Specialist and Instructor and civilian survival school operator, says all a compass truly needs is: a magnetic North arrow, bearing markings, straight edges, and durability. “Any additions to this are simple bells and whistles that can in some cases actually make a compass less user-friendly and increase user error,” she says. The Suunto A-30 gets you simple baseplate functionality from a top-notch brand — as evidenced by the dominance of Suunto in these recommendations — for about $20. The A-30 is a nice balance between the core stuff you need and a fair price. While it doesn’t feature the patented global needle found in better models, it does add basic features like a magnifying glass that the cheaper A-10 doesn’t have. Best for global use:

Features a global needle, helpful for those who travel a lot or live in southern hemispheres. 1.7 oz. Otherwise, same features as MC-2.

If you want to spend a little more for a better compass (around $50-60), we like either the Suunto M3-G or Suunto MC-2. Both featured illuminated markings (usually by “charging” it with your flashlight), declination adjustment, and a clinometer (not needed for most people). The MC-2 has the advantage of a mirror, which folds down to cover the compass during storage and can be used for navigating or signaling. The M3-G features the deeper casing and global needle, which will make it easier to find North quickly and reliably no matter where you are and how un-level you may be. The MC-2, on the other hand, is “calibrated for the northern hemisphere.” Or as a backup:

Weighs just 0.18 oz. Clips to the sides of maps, clothing, backpacks, hats, or anything with an edge. Fine for basic NSEW directions and movement.

If you’re on a tight budget, a quality button compass is fine. They’re also great backups in a primary kit or when used in less-important kits where you don’t want to spend too much (such as your everyday carry).

The Suunto Clipper is a roughly 1” x 1” stamp of a compass that can be clipped (hence the name) to places like a watch strap, backpack, or the side of a map. If you can’t find the Clipper or want to save another $5, the Sun Company Button is another ultra-cheap backup option that comes embedded on a piece of plastic that also can serve as a straight-edge for use with a map in a pinch.

On the value of having a small backup: “People will get into situations where they don’t trust their compass for whatever reason,” says Reid Tillery, a Army veteran and search and rescue professional in Florida we interviewed for this review. “Having a backup compass allows you to double check it. If both compasses are pointing in the same direction, you can stop second-guessing and get back to navigating in the right direction.” 5 oz "military style" compass. Only relevant if you already know how to use this kind of compass.

Experts don’t recommend a military (“lensatic”) compass unless you already know how to use one and have a need for the extra features. If that’s you, we like the Cammenga Tritium 3H, which has been the US military’s longstanding compass for a reason. Built to last and ultra-accurate if you know how to use it, the 3H also features tritium no-charge-required illumination for night navigation.

The compass market tends to be split into a few legit and well-known companies vs. everything else that’s cheap and random.

There are many types and shapes of compasses, but these are the most common you see marketed for survival purposes:

While a simple button compass can roughly tell you NSEW, we consider the following features to be the minimum needed for easy emergency navigation. 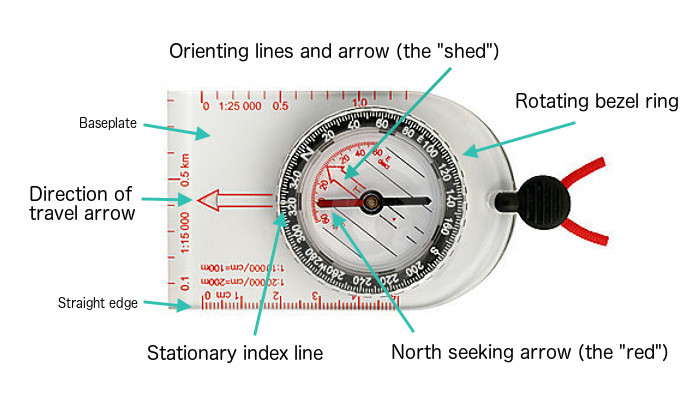 Lensatic compasses are a little different. The degree numbers are inside the housing, and they spin with the north seeking arrow. Instead of orienting lines and arrow, there is usually a single orienting line (still the “shed”) etched into the glass that spins as you move the bezel.

Additional features (and if they matter)

Other than lensatics and Cammenga’s D3T, almost all compasses have liquid in the main needle chamber, which smooths the rotation and dampens needle sway as it settles on North.

That’s a great feature, but it can be a liability. Cheaper, older, or beaten-up compasses will often leak fluid. That can cause air bubbles, which tend to float near and even stick to the compass needle, interfering with its function. A bubble that’s less than 25% the size of the chamber can usually be worked with, but at best it reduces the trust in your readings. A fully drained chamber will allow you to still use the compass, but it will take so long to stop swaying that it renders the compass impractical.

Experts still recommend using a liquid-filled compass, but that risk adds to the importance of buying from a quality brand. It also means you should check on your compass in your annual preparedness review to see if there’s any leakage — that way you’re not surprised in an emergency.

There’s a difference between magnetic North and the North Pole / “top of the world.” You can learn more in the map and compass lesson, but the impact on compasses is that you often have to offset the reading on your compass by a few degrees (“declination”).

Some compasses include an adjustment where you set the declination once and then don’t have to think about it again. That can be handy for frequent hobbyists — and if you already use this feature, it’s fine to continue doing so — but preparedness experts feel it’s not worth it for most people in this context.

One reason is that magnetic declination changes over time, so you can’t just set it and forget it over a period of years. Another is that if you aren’t using your compass frequently, you can forget that you have it automatically adjusted and throw your headings off by several degrees without realizing it.

Manually adjusting for declination as you use your compass isn’t that big of a deal, and remembering that skill is a good way to remember your overall compass basics.

Some compasses come with a printed-on or fold-out degree scale for judging slope angle — but this feature is unnecessary for most. Even if you are a frequent traveler in high-alpine backcountry where avalanches are a danger, clinometers are difficult to use and trust without lots of practice (and by then your judgement is probably accurate enough). If you know how to use one and it comes on your compass (like the more expensive Suuntos), great, but don’t buy any compass for its clinometer.

Imagine putting a compass on a flat table, then holding a magnet nearby but a few feet above or below the level of the table. The needle would try to point in the right direction but it will also be pulled up or down towards the magnet. That tilt can cause friction as the needle spins and settles, potentially affecting your reading.

Although this is mostly just an aggravation, not a real problem, we do like compasses with larger chambers that provide more room for tilt. These are referred to as “global” because the extra space is more forgiving in locations around the planet where the tilt is stronger — but we like it even if you stay in one place, simply for the smoother, faster, and more reliable function. 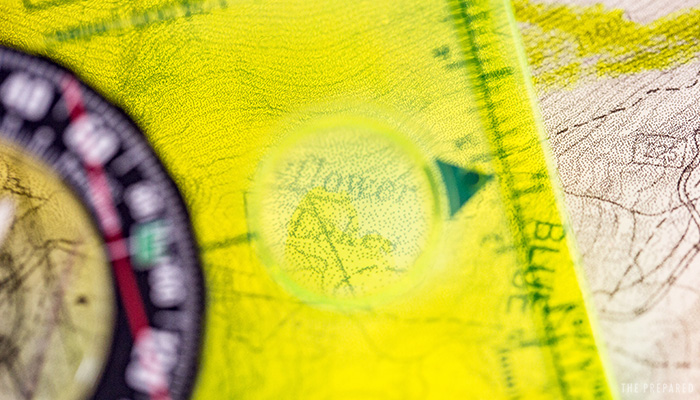 Often a small “bubble” in the plastic baseplate, the magnifier helps you see small stuff on underlying maps. Helpful if you have poor eyesight — but many compasses have a magnifier that’s so small it’s nearly useless.

Mirrors are often built in to help you read the compass while holding it up to a landmark. That can be helpful, but we actually like compasses with mirrors for another reason: it’s an easy way to have a signaling mirror (or backup) for when you’re lost or a vanity mirror for grooming and medical needs.

These are the other close contenders for our top picks that didn’t quite make the cut.

Brunton TruArc 3: Brunton’s are American-made but overall have design quirks and quality issues that make us steer clear. This simple model, however, is a highly-rated beginner compass that packs a global needle and straightforward operation into a light, $15 package.

Brunton TruArc 7: We strongly dislike the dual-hinge mechanism used for the (relatively small) cap and mirror. It feels like it will snap off in your bag or from heavy use.

Cammenga D3-T: The D3-T is a commendable attempt at combining the durability of a dry lensatic needle with the ease of use of a baseplate design. We’d love to love this compass, but design quirks pushed this off our shortlist. If Cammenga can address those issues in future iterations, it could be a perfect compromise.

K+R Alpin Compass: This is a well-laid out, German-made baseplate compass with mirror, but too many reviewers complained of the supposedly “thermo-elastic” fluid-filled needle housing leaking.

Silva Ranger 2.0: Now made in China rather than Sweden, this is the latest evolution of the original orienteering compass. Still popular to this day and a generally-fine compass. But we’re not fans of the rounded edges and corners because they make it harder to use the baseplate with your map to plot courses. And it’s noticeably bulkier than the Suunto options, including a cap and mirror we think is unnecessarily big.

Suunto A-10: This baseplate offering from Suunto is hardly distinguishable from the A-30. However, there’s no magnifying lens or illumination, so rather than a slim savings of around $5 we’d just buy the A-30.

The importance of knowing your way around

Returning "Situational Awareness" to the forefront