I haven’t been to a store in two months. And while my family is far from starving, there are some staples we’ve been missing, like sour cream.

Last week, my wife was desperate enough for sour cream that she was threatening to go into a germ-ridden store to obtain some. I did the only thing I knew to do: go to Amazon and see if they sold sour cream powder or something like it.

I instantly found Hoosier Hill Farm Sour Cream Powder. There were plenty of other sour cream seasoning powders on Amazon, but this was the only one I saw that promised real sour cream. It had just a few ingredients: Sour cream powder, (cream, cultures, and lactic acid), cultured nonfat milk solids, and citric acid. It promised “no hormones.” I sent Jeff Bezos $13.85 of my own money. Roughly a week later, the sour cream powder was at my door to be disinfected.

Why would I buy powdered sour cream?

Sour cream isn’t a must-have like water, but it is a kitchen staple that can add a little something extra to many dishes, like baked potatoes and chili. It’s also a common ingredient in many recipes. But if you’re avoiding stores due to the COVID-19 pandemic, it can be hard to obtain since it’s a fresh dairy product. Powdered sour cream, which you can buy online, have shipped to your door, and reconstitute with water, might be a tempting option.

The instructions are simple enough. Mix three parts water with five parts sour cream powder. Then, Hoosier Farms says in the product description, “Sour Cream Powder can be used in practically anything you can think of as a replacement for the refrigerated version; Create dips, sauces, potatoes, cakes, muffins, spreads, and casseroles – you name it- with sour cream powder.”

Sounds easy, right? My wife’s first try was a watery solution. It looked like someone had sprinkled baby powder in creek water.

I got another bowl out and followed the instructions, adding three parts of water to 5 parts of sour cream powder. I mixed, and I mixed. And got the same dirty chalk water my wife did. Undeterred, I vowed to add more and more powder until I got something resembling sour cream.

As I had to add several scoops of this wretched powder to the bowl, I should comment on the smell, which I’d liken to a tub of drywall spackle. One Amazon reviewer said that “it smelled like glue or something.” I was ready for this, but I was also determined to power through.

Several scoops and the introduction of a whisk later, I was rewarded with something that resembled sour cream. My hopes rose—perhaps I had successfully reconstituted this chalky powder into sour cream? I took a taste. 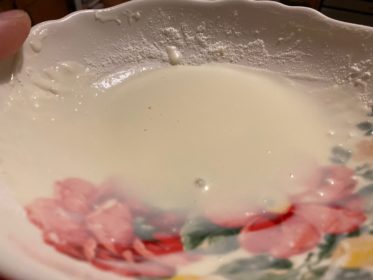 No, the powdered version did not taste like sour cream at all. Imagine the taste of vomit, only somehow worse, both more sour and more bitter.

Worse than the flavor was the texture. Despite hitting the mixture with a stick blender and a whisk, it was gritty despite the smooth look of the cream. Later, for quality assurance, I tried another batch.

The trick to the texture appears to be in abandoning the package’s instructions. When I whisked a 1:1 ratio of powder to water, the texture turned out best. This produced a cream that was not quite but almost entirely like store-bought sour cream. The taste, however, was so awful that there’s no point in bothering.

One Amazon reviewer said it “It tastes like chalk board dust mixed with pet dander, and finishes with an indescribably chemical after taste. Wow that was horrible.” I agree with that review.

I racked my brain to figure out what the problem is. This powdered sour cream has four out of five stars on Amazon, and most reviews are, indeed, positive. Could it be user error? Did it spoil somehow, despite being well within its use-by date?

Amazon reviewer B. Anna suggests to not make it with water but doesn’t mention what she uses instead. Milk? Goat blood? Motor oil? One reviewer mentioned mixing it with yogurt, but I’m not going to ruin perfectly good yogurt that way.

Final verdict: Hoosier Hills sour cream is not worth it

Ultimately, I decided not to bother polishing this particular turd. I don’t think anything could counteract the nigh-indescribably awful flavor, even if you could somehow improve the texture. We didn’t have much success with this product, but if sour cream is essential to your prep, you could give it a try.

As for whether it was user error or a spoiled batch: if I’m able to screw it up that badly or if there’s a better than average chance of a semi-nonperishable spoiling before it gets to my door, then there’s no way I can recommend a product like this.

The good news is that it’s easy to make your own sour cream, at least in theory. All you need is some raw milk, cream, and white vinegar or lemon juice. We buy raw milk from a microfarm, so we don’t have to deal with the risks of stores. My wife mixed up a batch and we gave time for it to set. Unfortunately, all we wound up with is lemon-flavored milk. If you’d like to try it yourself, and hopefully have better luck than we did, here’s a video that shows the process.