It’s a classic action movie scene: the bad guys or cops are at the door. The protagonist ducks behind a wall, flips over a table for cover, and hunkers down for a shootout. But will those tactics work in reality?

Thankfully, the internet is full of firearm enthusiasts who have filmed themselves shooting pretty much every imaginable object. So it’s not hard to find out what works for cover and what doesn’t. This guide curates all of that testing onto one page.

The bad news is that there isn’t much in your house that will reliably stop a random bullet. There are plenty of ways to conceal yourself, but not many ways to cover yourself.

So unless you’re in something purpose-built, such as a panic room, your best bet is to first avoid the danger, and if you can’t, put on hard body armor held in a plate carrier. If you hear a bump in the night, throw it on before you go stumbling about.

It’s also good to understand how different materials hold up to gunfire in case you need to defend yourself near innocent bystanders. Imagine, for example, that you have to shoot an intruder coming up your stairs — but your child is sleeping on the other side of the wall where you’d aim towards.

More: Basic ways to harden your home against intruders and beginner’s guide to guns

A quick note on calibers

Some ammo might bounce off a wall while another type punches right through it. Generally speaking, rifles and shotgun slugs are harder to stop than pistols and buckshot. That’s why you try to wear hard armor, which can stop almost everything, instead of soft armor that only stops pistols.

When this guide refers to shotguns, that’s mainly 12 and 20 gauge. When referencing pistols, it means common calibers including:

Most walls don’t stop bullets, but brick is best

Most newer houses are built of the cheapest possible materials, like vinyl siding and drywall. It would take a thick stack of those materials to provide cover. 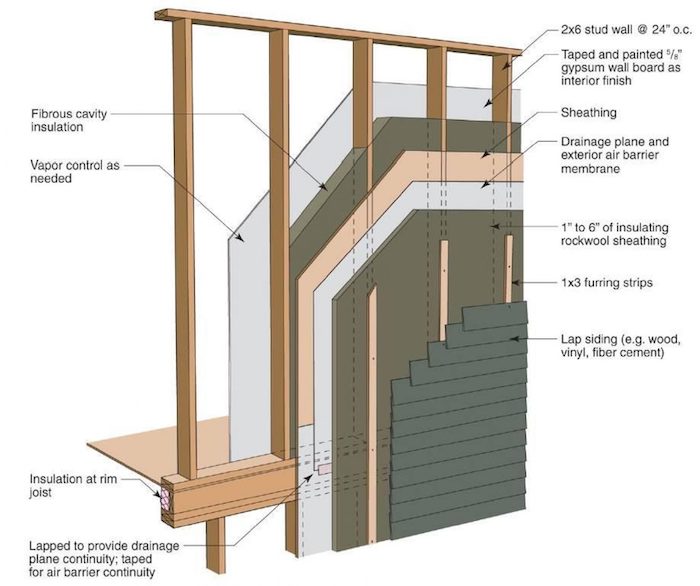 Even a humble .22 penetrates multiple layers of drywall:

Matt Risinger teamed up with Mythbusters veteran Tory Belleci to shoot a few target walls made of typical building materials like drywall, OSB lumber, and cement board. Even small calibers like .22 punched straight through. The sections with studs (2×4 lumber boards that frame the wall) caught a few smaller rounds, but in a real-life scenario, that only gives you about 1.5 inches of protection.

They tested filling walls with sand and stacking bags of concrete behind them, which worked, but isn’t exactly something you could whip up in a hurry. They also built a special wall that stops most bullets, which you might want to check out if you have a custom house built.

But there’s good news if your home is brick. The guys at Rounds Down Range shot several rounds at brick walls, and brick is surprisingly good at stopping bullets. Brick stopped all handgun rounds plus armor-piercing 5.56 NATO rounds, .308, and even a shotgun slug. Impressive!

That said, each round takes out a chunk of wall, so the wall would only hold up so long if it were sustaining heavy gunfire.

The lesson here: buy brick. Or perhaps concrete. YouTuber d1bottch shot a block of concrete with multiple rounds, and it held up great until it was hit by an SKS, and that was after it had already taken several shots.

The guys at Eagle Builders shot their insulated concrete panels with different powerful rounds, and they all held up well. But unlike the video above, they didn’t shoot each tile repeatedly.

Cinder blocks are largely hollow, so you’d expect them to be pretty poor for bullet defense. But Brayden with Langley Outdoors Academy shot cinder blocks with a 9mm, AR-15, and a shotgun with 00 buckshot, and the blocks stopped both 9mm and 5.56 rounds. However, the buckshot broke the cinder block in half.

But what about sturdier exterior doors made of solid wood or metal? Unfortunately, they’re not much better. Edwin Sarkissian shot several different exterior doors, including heavy commercial doors, and a common 9mm punched right through all of them, and even multiple doors at once.

So unless you know you’re behind an armored door, don’t hide there!

It’s a common action movie trope to see someone flip over a table and crouch behind it for cover. Unfortunately, it just won’t work in real life. BuzzFeed took to the gun range to shoot household objects, and a 9mm blasted straight through a solid wood table. A recliner fared even worse since most modern living room chairs and couches aren’t much more than fabric and air.

What about a mattress? Paul Harrell tested a movie myth where the heroes stand up a mattress on its edge for a shield. Even a fairly weak .25 ACP punched straight through.

But when Paul put the mattress down flat (as it would be if you were sleeping on it), it turned into a surprisingly effective bullet block. Most rounds got through, but the mattress stopped many smaller-caliber rounds, including .410 shotgun shells (fired from a Taurus Judge pistol). But if you’re being shot at by an AR-15, forget it. In fact, the springs inside the mattress can fragment the bullets and make things worse.

Indiana Jones survived a nuclear blast by hiding in a fridge, but could a modern refrigerator protect you from a common bullet? Edwin Sarkissian shot through seven refrigerator doors with an AR-15. They don’t make them like they used to.

But that’s an AR-15. What about a 9mm? It only went through four refrigerators. That’s not surprising given that most modern refrigerators are largely made from thin metal, plastic, and styrofoam.

Don’t expect much better from a washer or dryer, which again are made of thin sheet metal. Jeb Slack shot at four washing machines with a variety of calibers. The second machine stopped 9mm and .45 ACP rounds, so hiding behind a washer and dryer might save you. It took three washing machines to stop an AR-15.

Don’t hide behind the toilet

Don’t bother hiding behind a toilet. You’ll only die embarrassed. Spencer Rands of ASDI shot ceramic toilets with several rounds, and they shattered like, well, ceramic. Even worse, the resulting explosion sprays shards of ceramic shrapnel.

We couldn’t find videos of shooting a bathtub, but given that typical bathtubs are made from thin plastic these days, we wouldn’t count on that either. Maybe a cast iron tub?

Sometimes you see people in movies deflecting bullets with a cast-iron skillet. In the video game PUBG, you can wield a cast iron skillet to bust skulls and block bullets. It makes sense. After all, cast iron is pretty tough.

Unfortunately, even a 9mm pistol can easily blast a hole through a cast-iron skillet. However, two skillets can stop pistol rounds, so do with that what you will.

A cast iron tub might do the job if it were positioned so you could hide behind it, especially if you could fill it with water.

Paper does a great job of stopping bullets. ASDI’s Spencer Rands shot the 4,000-page 2013 IRS tax code and found that it easily stopped handgun rounds, even though rifle rounds like .308 pierced it, as did a 12-gauge shotgun slug.

You won’t find many civilian rounds more powerful than a .50 BMG. The guys from Demolition Ranch shot boxes of printer paper at close range with a .50 BMG, and amazingly, it just took two boxes of paper to deflect the bullet. It pierced the first box, hit the second, and then exited the side of the second box.

So if a deranged gunman is chasing you, maybe the best place to hide is a brick library.

(Please don’t shoot trees without a good reason!) Most hunters and country marksmen know that trees are pretty bullet resistant, but just how much can they take? Top Shot Dustin shot an entire litany of calibers at a pine tree to find out. As an extra nice touch, he placed a ballistics gel torso behind the tree to see how far the bullets would penetrate a body if any made it through.

The only caliber he could get to pierce the tree and enter the torso was .50 BMG, and at a fairly close distance. Even then, he had to put the torso right up against the tree to achieve penetration. This is a good test, because pine is a softwood, so not as durable as a hardwood like oak, and the tree trunk had a fairly small diameter — just wide enough to hide behind.

Kentucky Ballistics tried to cut a tree down with a full-auto AR-15. He eventually gave up and used an axe.

Some parts of cars stop bullets

Vehicles are generally good for bullet cover — layers of metal are better than most other options — but it matters which part of the car you duck behind, and you don’t want to be behind a car if you have better choices.

In a DEA training tape made several years ago, members of that agency take a four-door sedan out to a secluded range and, after placing two cardboard targets under the front dashboard area of the driver’s side and another simulating a crouched suspect in the backseat floor area, commenced shooting the car full of holes. The barrage recorded on tape is not from just one agent or gun but pretty much every pistol and long gun available to DEA agents at that time: 9mm pistols, .357 revolvers, shotguns with buckshot and slugs, 9mm carbines and 5.56mm AR carbines. The vehicle was shot from the passenger side as well as straight on from the front.

Although the tires are flattened and virtually every square inch of the car has a hole in it, the vehicle starts and the instructor can drive away (limp away is probably a better way to describe it). But the amazing thing: When both targets are checked, neither have any hits.

Impressive, but not all cars are made equal. Many people have performed ballistics tests on cars, with mixed results. 704 Tactical shot at a sedan and even some 9mm rounds passed through the car doors.

Some say that a windshield can deflect bullets, but TheFireArmGuy tested it out, and we wouldn’t use a windshield for cover.

Paul Harrell demonstrates how windshields can sometimes take the energy out of small arms fire, but again, it’s not something you should rely on.

FieldCraft Survival shot up a car and found that the most reliable area to take cover is behind the engine block. The pillars held up well to small arms fire, but nothing made it through the engine block.

Booby trap laws: Is it illegal to go the full “Home Alone” to stop bad guys?

Does insurance cover damage from civil unrest and looting?