One of history’s oldest preps. Any candle will help, but purpose-built emergency candles perform better. Their best role is for long-term needs in your home, but some people also carry them in go-bags and car supplies.

Candles used to be a must-have for any beginner prepper up until just a few years ago. But modern LED, rechargeable battery, and solar charger tech have changed the equation — making candles more of a nice-to-have backup, for very long-term emergencies where it makes sense to have unpowered passive light, or for a fringe event like an EMP attack.

In practice, most people end up with a few day’s (or more) worth of candles in their home supplies, and possibly a candle or three in their away-from-home kits.

Survival candles can also help with needs other than simply lighting an area:

Have you ever stopped to think about how candles work? In a traditional wax candle, the wick is lit, which melts the wax, which is then wicked / absorbed and acts as fuel for the fire.

Candles don’t necessarily have to be made of wax, either. Traditionally they were made of animal tallow, but candles can also be made from liquids like olive oil. Candles can be made all sorts of ways, but fundamentally they consist of a wick and some sort of slow-burning fuel.

The most important stuff: 3-pack of clean-burning liquid paraffin candles. Paraffin fuel is encased in a plastic container to prevent evaporation and breaks.

This style of candle, where a large amount of liquid paraffin is kept in a plastic container, are typically the best form factor for home supplies. We’ve tossed models like this around for years and rarely have problems with leaks. This SDS model will last around 115 hours — if you burn it for 6 hours a day, that’s enough to cover your basic two weeks of preparedness. 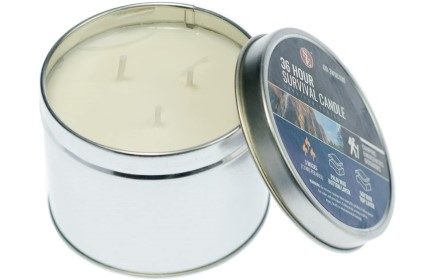 Features an aluminum tin to secure the candle in your go-bag. Three wicks allow for flexibility when it comes to heat and light output—made from soy and palm wax. 36 hour burn time. Made from clean-burning natural beeswax. The candle is contained in a sealed aluminum tin. 25 hour burn time.

When storing candles in away-from-home kits, it’s nice to use this metal tin style because it’s durable, the wax is contained, you can use the lid to quickly put out the flame and toss it back in your bag, it offers some wind protection, etc. The SE Survivor candle tin has three wicks which you can burn one at a time for longer burn time, or light all three for more light and heat. The Candle Buzz beeswax tin is a nice option if you want something on the natural side, and beeswax has a number of uses in the field like sealing leather and rust-proofing metal. 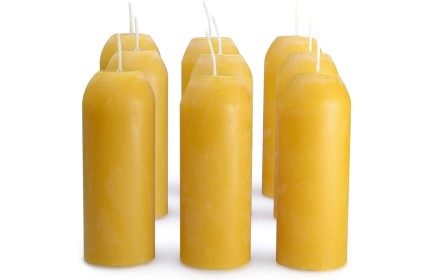 Collapsible lantern made for UCO Lantern Candles. Stores a candle inside when not in use. It has a handle for carrying or hanging.

If you prefer a more natural option, the UCO beeswax candles are a good go-to, but only last 12 hours each. UCO candles can be placed on a tray or used in the UCO Candle Lantern.

Although not currently top picks, these are decent options:

How many candles should you have?

In the article “Emergency Lighting” in the LDS Preparedness Manual, authors Robert Roskind and Greg Pope say, “Every family should have a large supply of candles. Three hundred sixty-five candles, or one per day is not too many. The larger the better.”

365 candles isn’t a crazy amount, but that also may be too overwhelming for a casual prepper.

If you’re just trying to cover your basics, which means being able to survive a two-week emergency, you can back out the math. For example: If a candle lasts 25 hours, and you’re only using it to keep a room bright enough for basic needs, you could assume 6 hours of burn time per day (from dusk until sleep) for 4 total days per candle.

So 2 weeks would require about 4 candles. That means you’ll cover the vast majority of emergency situations for $20-40.

But that’s just the bare-bones. You’ll need more for multiple rooms, to create enough heat to warm a shelter or food/water, etc.

Heating and cooking with candles

Many preppers cite heating and cooking with candles. These are possibilities but just aren’t realistic. It’s like digging a latrine with a spoon. Sure, you can do it, but there are much better tools. The HERC ovens can cook food with small tealights, but they’re not cheap.

There are plans all over the internet for a variety of candle heaters made from clay pots with a metal core or a series of metal cans. It would be handy to know how to make these, but there are better preps to invest in for keeping yourself warm.

As for cooking, it’s a similar story. In one Instructable, someone built a three-candle burner that can heat a can of soup in 15 minutes or boil water in 45 minutes. Meanwhile, a Jetboil or an inexpensive pocket stove can boil water in about three minutes.

For heating and cooking, you’re better off using your candle to start a larger fire.

Can you make your own?

Yes. There are several ways to do so in a pinch. Here are just a few:

Groan. But there’s a real risk here — candles are one of the leading causes of house fires. The National Fire Protection Association offers these eye-opening facts on candles (US data) along with their “CYA” recommendation to avoid using candles indoors altogether:

Keep these safety tips in mind:

The most common forms:

Candles that can’t stand alone aren’t the best for preparedness. Opt for pillar candles, tealight candles, or candles that are otherwise housed in a metal tin. The latter is the best choice for a go-bag, since there’s less worry about wax melting and making a mess in your bag.

There are a surprising amount of wick types out there. But the reality is that unless you’re making your own candles, you’re not going to get a lot of choices about what wick you get, and the vendor may not even advertise what material they use.

Some candle wicks have lead cores, and although it’s unknown if they pose an actual hazard, most US-based manufacturers abandoned them in the 1970s. If you’re concerned about lead in the wick, buy only candles manufactured in developed countries. To test if a candle wick has lead, run it over a piece of paper. If it leaves a gray pencil-like mark, it probably does.

But again, this is largely just trivia unless you get into making your own candles.

Market realities mean you don’t get a lot of say over wicks, but you have several wax options to choose from:

Some candles are infused with citronella, which supposedly helps ward off mosquitos and other insects. But the data shows it’s more myth than fact.

Melt temperatures: You don’t want your candles to melt into a pool of goo while in storage. Different candle waxes have different melt points, generally between 113F (for some soy waxes) to 180F (for palm wax). Soy and paraffin tend to be on the lower end, while beeswax is on the higher end for natural waxes at 144-149F. Different wax blends have different melt points, so check with the candle manufacturer to get the correct temperature.

Can a flower pot and tealight candle create enough heat to save you in a cold emergency?

Making a candle from a hollowed out orange: hack or hoax?