Your home should really have at least one fire extinguisher, and according to the National Fire Protection Association, ideally one on every level of the house and another in the garage. Based on our research, which included comparison studies that looked at factors such as ease-of-use, reliability, and cost, we like the First Alert PRO5 for your home and First Alert Auto for your car.

Hopefully you don’t need to be convinced why. Fire safety studies show that a portable fire extinguisher successfully puts out a home fire 94% of the time — as long as you can get to it within a minute or two.

Placement is key, as there are some high-risk areas (such as the kitchen) where you’ll want them readily available. A good rule of thumb is to have an extinguisher available within a maximum of a 40-foot travel distance from anywhere in the house. The older or less mobile you are, the shorter that distance should be.

Based on our research, which included comparison studies that looked at factors such as ease-of-use, reliability, and cost, you can feel safe buying these models: Best for most homes:

Rated 3 A: 40 B:C, which means it can handle the vast majority of common house fires where quick reaction can make the difference. Also great for most homes:

The First Alert PRO5 came out on top for its affordability (around $50), availability, and ability to extinguish the most common household fires. This extinguisher is rated 3 A: 40 B:C, which means it’s appropriate for all common home fires including wood, paper, burning liquids, and electrical fires. What makes it really stand out is that it exceeds the NFPA’s minimum-size recommendations for home extinguishers, yet it’s still lightweight at just 10lbs and can be recharged after use for half the price of buying new. Another advantage is that its discharge valve is made from metal, which makes it more reliable than plastic valves used on other models. They’re commonly found online and in your local big box stores.

Also great is the Amerex B402. It’s essentially identical to the PRO5, just less commonly found.

If you want a more portable or smaller option that’s easier to store, the First Alert HOME1 and Amerex B417 are the little siblings, coming in at half the weight (5 pounds instead of 10) at the cost of lower capacity (1A 10B:C). If you go this route, we recommend still getting a large one for your most primary spot (probably the kitchen), while using these smaller ones to fill in gaps around the house.

There are smaller options, like The Fireman Extinguishing Spray, but we’ve seen some pretty bad reviews and reports of leaky seals, which allow it to discharge prematurely. The Fireman spray is held in an aerosol can with a trigger nozzle — just point and spray. There’s a non-toxic wetting agent that is rated for Class A, B, C, and K fires, and the clean-up is minimal; just soap and water. 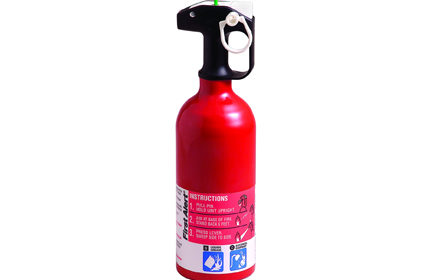 Great for the car:

5B:C, will put out small electrical and flammable liquid fires. Can fit in glove compartment or be mounted around the vehicle.

Weighing just three pounds, the First Alert Auto Fire Extinguisher is compact enough for easy car storage. Its rating is 5B:C, so it’s appropriate for putting out flammable liquid and electrical fires. The key is keeping it accessible; an extinguisher that’s small enough to fit in your glove compartment will be much more useful in an emergency than the extinguisher carefully mounted in your trunk. Where you choose to place it depends on your vehicle, but the consistent advice is to keep it centrally located, either mounted on the back of a seat or just in front of the passenger seat. Mounting is important; you don’t want it rolling around the floor of your car where an accidental discharge will ruin your day.

While Kidde is one of the largest manufacturers of extinguishers and commonly found in stores like Walmart, reviewers such as Wirecutter warn against them due to numerous recalls of their products. For example, their plastic-handled extinguishers were recalled in 2017 because they became clogged and difficult to discharge, failing to activate when needed.

The standards are set by Underwriters Laboratories (UL), the global safety certification company. According to the Fire Equipment Manufacturers’ Association:

The most common residential fire causes, from a 2017 US Fire Administration study:

Experts recommend the ABC combo types as the best fire extinguisher for home use because it covers the widest range of the most likely fires.

While it may seem that a Class K would be appropriate in a home kitchen, it’s not: they’re designed to be effective against animal fats and grease used in larger commercial kitchens.

According to experts, an extinguisher with a B rating can be effective on a small Class K fire — the kind you’d have in your home kitchen. But the vice versa is not true, making a Class K pretty ineffective in the home.

Tip: Using the wrong method to put out a grease fire is one of the main situations where people mess up. If you use water, for example, all you’re doing is pushing the burning grease around and making things worse.

The numbers you might see next to letters in a product description reflect how strong each letter is.

Class D extinguishers — used for flammable metals such as magnesium, titanium, sodium, etc — are identified by a five-point star containing the letter “D”. These won’t have a numerical rating, unless they’re multipurpose for use on other types of fires.

Class K extinguishers are found in most commercial kitchens, and are identified by a hexagon containing the letter “K”. There is no numerical rating for a Class K extinguisher, unless it’s multipurpose; for example, 2A:K would contain the equivalent of 2.5 gallons of water and would be effective on a cooking oil fire.

Types of extinguishers and how they put out fires

A fire needs three things: oxygen, heat, and fuel. So to reduce a fire, an extinguisher needs to disrupt at least one leg of that tripod.

Although 99% of you will only use the “dry chemical” type, here’s the full range of options: Where to store extinguishers (hint: not under the sink) 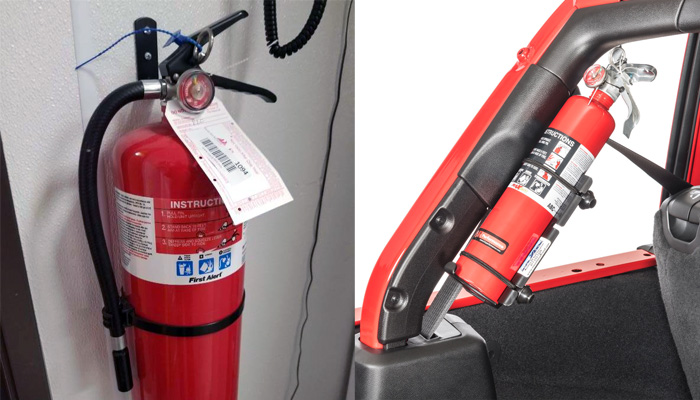 It makes sense that you want to keep your extinguishers close to the riskiest areas. According to the U.S. Fire Administration, the kitchen is the riskiest, followed by garages and areas with appliances like your furnace.

But it pays to be thoughtful about placement within those areas. You want the extinguisher to be close enough for easy reach, but not so close it could be caught up in the fire to begin.

And the closer to an exit, the more likely you can safely reach that extinguisher without trapping yourself in a hot corner.

Consider under the kitchen sink:

Some extinguishers will come with a mounting kit, but if not, be sure to buy an appropriately sized kit for your extinguisher. You’ll want a kit that allows you to easily remove the extinguisher; make sure everyone in your home knows where they’re mounted and how to remove them.

How long do fire extinguishers last? What about maintenance?

Most common extinguishers can last 12 years or more. Rechargeable fire extinguishers should be professionally inspected every five years to make sure they are properly charged and in good shape. If you have a disposable extinguisher, those typically have a 12-year shelf life, so you can count on replacing it every decade or so.

The thing is, many people have, at best, a vague idea of when they bought their extinguisher.

Tip: When you buy it, use a permanent marker to write the month and year directly on the container.

A better rule of thumb is to keep an eye on it: it’s a good idea to add just a minute or two of inspection to your annual preparedness review. Just give a quick once-over to see if anything looks bent, damaged, loose, rusted, etc. Is the locking pin still in place? Is the pressure gauge below the green zone?

If you notice anything, call the company or even your local fire department for advice.