The Stockpile of Food in My GarageAs I hunker down at home with my family amid a global pandemic, I have a new appreciation for a strange religious tradition.  By McKay CoppinsMarch 19, 2020

On a metal storage shelf in the corner of my garage, dozens of multi-liter cans sit stacked on top of one another. They are filled with dehydrated carrots and pinto beans; wheat, oats, and powdered milk—enough food, at least in theory, to keep me, my wife, and our three kids fed for several weeks in the event of an emergency.

I am not a doomsday prepper, nor did I acquire this stockpile in a recent spasm of pandemic panic-shopping. I am, instead, keeping up an odd religious tradition that stretches back more than a century—one that I’ve always found slightly embarrassing and anachronistic, but that’s felt a lot more vital lately.

Like most lifelong Mormons, I grew up hearing about the importance of “food storage.” The Church of Jesus Christ of Latter-day Saints has long encouraged its members to keep enough food, water, and emergency supplies in their home to last at least three months—counsel that has spawned a quirky subculture within the faith, complete with home-pickling seminars, dedicated Pinterest pages, and custom-made furniture for cleverly storing canned goods. While the most extreme practitioners tend toward apocalyptics, the Church offers a more practical reason for food storage: to ensure that “should adversity come, we may care for ourselves and our neighbors, and support bishops as they care for others.”

This ethos of preparedness permeates Mormonism. Among the faithful, stories abound of Latter-day Saints leaning on food storage after losing their jobs, or doling out canned fruit to neighbors after a natural disaster. We take turns volunteering at the Church’s many “storehouses,” where stockpiled food is distributed to people in need. We read about our ancestral pioneers, who on their westward trek established crops to be harvested by the companies that followed. “If ye are prepared,” an oft-quoted scripture goes, “ye shall not fear.”

Here’s what that looked like in practice for a ’90s Mormon kid in suburban Massachusetts: A section of the basement in my childhood home was transformed into a kind of makeshift grocery-store aisle—wooden racks covered in nonperishable food items. Like many families, we would rotate our supply so that it didn’t go bad, drawing on it for daily meals and then replacing what we’d consumed during trips to Costco.

I didn’t think much of this practice at the time. My Mormon friends saw it as normal, my non-Mormon friends got a kick out of it, and, hey, we never ran out of canned corn. But the pioneer spirit of the enterprise was lost on me—and the older I got, the less it resonated. Spending most of my life in comfortable cities and suburbs, I never had to think much about the source of my next meal. This relative privilege fueled a lack of imagination: The idea of confronting a systemic food shortage was as far-fetched to me as a zombie apocalypse was.

This sentiment was only hardened once prepper culture started gaining mainstream notoriety a few years ago. The bunker builders and ammo stockpilers on reality TV seemed like distant caricatures compared with the people I knew practicing commonsense emergency preparedness. (PSA: The Department of Homeland Security suggests that Americans keep enough food and water in their home to last two weeks.) But the growing prepper cottage industry, promoted by hucksters such as Alex Jones, made food storage look paranoid and extreme, even toxic. There was never a moment when I consciously ruled out the idea of keeping around some extra water and rice; I just didn’t want to be associated with the cultural trappings of that world.

Around the time my first daughter was born, my in-laws—apparently concluding that I was a dud in the preparedness department—began taking steps to ensure that our new family would not die of starvation in the event of a famine. Each Christmas for several years, they gifted us (foisted on us, really) several large cans of storable food. I tried to protest that the stockpile didn’t make sense in our small Brooklyn apartment, but my objections were overruled. I was, I’ll admit, less than grateful for their generosity. “We don’t have room for this,” I would grumble to my wife, as we shoved cans of freeze-dried bell peppers under our bed.

Eventually, we moved to a suburb of Washington, D.C., where space was less of a concern, and we largely forgot about the cans in our garage—that is, until recently.

Ten days ago, I joked on Twitter that my coreligionists would do well to keep quiet about their food storage “in case things go full ‘Contagion.’” A few days later, as the seriousness of the coronavirus came into view, I joked—a bit more nervously—to my wife that the told-you-sos from her parents would be unbearable if we actually ended up needing the supplies they’d given us. In the days that followed, as the virus ravaged Europe, and major U.S. cities shut down; as social distancing became an American obsession, and restaurants came to resemble petri dishes; as the threat of a global recession grew imminent, and stories about potential supply-chain disruptions started appearing in the press—well, I wasn’t making jokes anymore.

A few nights ago, after an unnerving trip to a local grocery store that had been picked over by panic-shoppers, I came home and sheepishly suggested to my wife that we go out to the garage and take inventory of our food storage.

I had never actually looked closely at the cans, and as it turned out, the collection was less grim than I’d imagined. Yes, there was plenty of dehydrated broccoli. But there was also brownie mix and granola and something called “chocolate-milk alternative”—foods that actually seemed edible (or at least servable to our young children).

I knew that the sense of relief I felt as we examined the cans was irrational. Our fridge and cupboards were full. The grocery store would get new deliveries the next day. The likelihood of a serious food shortage in America remained, according to experts, extremely small. But the ritual of counting and stacking and sorting the cans—like so many rituals of faith—offered something more abstract than physical sustenance: peace of mind, a sense of hope, something to grip while the world is unraveling.

I don’t think I’m alone. Early yesterday morning, Utah was hit with a 5.7-magnitude earthquake. Debris rained from the top of a Salt Lake City building. Tens of thousands of people lost power. A recently established coronavirus hotline was temporarily knocked out. When I called a friend in the state to see how he was doing, he said the experience had made him realize how unprepared he was for an earthquake. After spending the morning brushing up on safety guidelines, he was on his way out to pick up supplies: His food storage needed replenishing.

McKay Coppins is a staff writer at The Atlantic and the author of The Wilderness, a book about the battle over the future of the Republican Party. 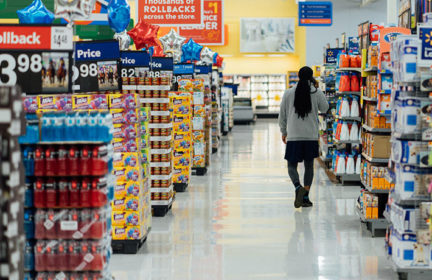