Salt is a surprisingly important food to stock if you’re preparing for longer-term scenarios. It has many uses that people have depended on for thousands of years, such as food preservation and helping you stay hydrated. But it’s not easy to find or make on your own, so if SHTF, you’ll probably be left with what you have on hand.

Outside of salty-heavy geographies, it can be difficult to acquire naturally. Lewis and Clark set up a salt camp in Oregon to boil seawater to extract the salt. At the time, they didn’t know about the nutritional need for salt, but the party wanted salt for seasoning and to cure meat. You can visit Lewis and Clark Salt Works today. (One of the original reasons for their expedition was the belief that there was a mountain of salt near the Missouri River.)

More: The essential foods to stockpile from the supermarket

On the more fantastical front, in the post-apocalyptic TV series Jericho (from the best TV shows for preppers list), the town’s existing salt mine became a key resource and a source of contention after nuclear war disrupted modern life.

Throughout history, cities and empires rose and fell based on access to salt, and wars were fought over salt and other spices. Salt was so valuable in the ancient world that it was used as a form of currency. The word salary is derived from the Latin word for salt, and the Romans built roads just to transport it. However, contrary to popular myth, Roman soldiers were not paid in salt — but American soldiers were paid with salt brine during the War of 1812.

Ben Falk, author of the excellent The Resilient Farm and Homestead recommends storing salt along with other commodities like seaweed and blue-green algae, because “Many of these are only sourced from relatively few areas across the world and are worth obtaining now, while they are more accessible than they have ever been in human history.”

Where salt comes from in nature

Salt is a plentiful resource in certain parts of the world. There are three ways it’s commercially extracted:

What happens if you don’t eat enough salt

A lack of sodium in your blood is called hyponatremia. The symptoms:

If you are in the wild and don’t have access to salt, your best bets for natural sodium sources are roots, especially dandelion roots, and wild animals. Blood and organ meats are rich in sodium.

More: Learn how to handle hyponatremia and other critical water survival skills in our online course

Essential diet need: You probably don’t usually think about salt when you’re thirsty, but salt is an essential electrolyte you need to replenish after breaking a serious sweat. You know how your sweat tastes salty? That’s salt leaving your body. When you drink an electrolyte drink like Gatorade, you’re mostly drinking salt and sugar (another valuable electrolyte).

Food preservation: Outside of dietary needs, the most use of salt in preparedness is preserving food. Salt draws the water from vegetables and meat, drying and preserving them and killing microbes. Whether you’re canning, curing, fermenting, turning milk into cheese, or pickling, salt is a must-have.

If you’re dealing with a long-term lights-out scenario, you can preserve many foods with a little know-how and some salt. For instance, chop up a head of cabbage, mix it with a tablespoon of salt, cram it into a jar, and cover with some cheesecloth — you’ll end up with sauerkraut that can sit on the shelf for months. You can preserve many vegetables with a bit of salt or saltwater. But only if you have the salt on hand.

Preserving animal hides: If you find yourself hunting, you’ll get more from your kill if you preserve the hide, which can be turned into clothing, cordage, etc. There are various and sundry ways to preserve and tan animal hides, using everything from special chemicals, alum, brains, and wood ash, but they all have one common ingredient: salt.

Medicine: Saltwater has many medicinal benefits. Gargling it can ease a sore throat and help clear up throat infections. Saltwater in a neti pot can help flush out and dry your sinuses. Concentrated saltwater can even be used to clean wounds (2 teaspoons of salt to 1 quart of distilled or boiled water).

Melting ice: Civilization may not collapse anytime soon, but you’re bound to have a winter storm eventually, and a generous sprinkling of ice on slippery surfaces can make them less dangerous.

Killing weeds: You’ve heard of “salting the fields,” and salt makes for an effective and non-toxic herbicide. Mix one gallon of white vinegar (minus two cups), two cups of salt, and a tablespoon of dish soap in a sprayer, shake it up, and spray where you want grass and weeds to die. You can also salt asparagus beds (before the asparagus sprouts) to keep weeds out, because asparagus, unlike most vegetables, loves salt.

Cleaning: Coarse salt is a terrific abrasive and many people use a mix of salt and oil to scrub out cast iron pans.

Salts to consider for your pantry

Long ago, the salt aisle was pretty simple: it was usually just salt and pickling salt. These days, there’s an overwhelming variety of salts, from simple table salt to gourmet salt flakes. They’re all fine in my book, but here are some of my favorites:

Kosher salt: My go-to in the kitchen, kosher salt is a medium-grained salt preferred by many cooks because of how easy it is to carefully dish out in recipes, as opposed to fine-grained table salt that tends to spill out. I use kosher salt not just for seasoning, but for fermenting, preserving hides, scrubbing out cast-iron, and de-icing sidewalks. My wife sometimes uses it for canning. It’s a versatile, general-purpose salt and pretty cheap. 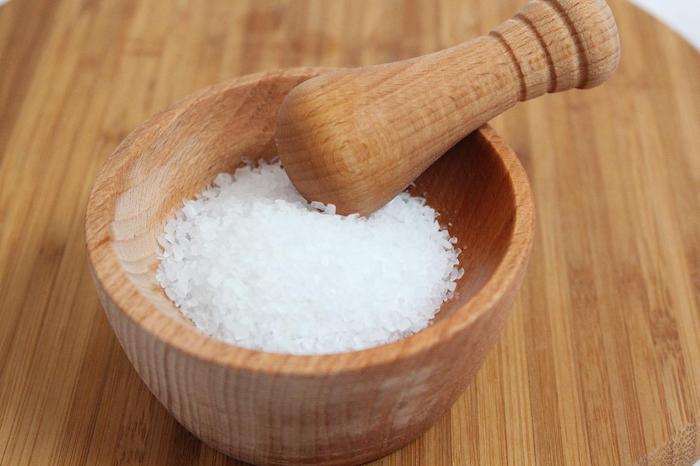 Note that some kosher salts, like Morton’s, have anti-caking agents that keep the salt from clumping. But that’s not recommended for canning and pickling because the additives can reduce the quality of the finished product.

Pickling salt: This fine-grained salt has no additives and is intended for preserving produce by canning or pickling. It needs to be stored in airtight containers so it doesn’t clump.

Himalayan salt: This is the trendy pink salt you see in shakers at hip restaurants. Many recommend it for its minimal processing, trace minerals, and medicinal properties, but the current science doesn’t show it to have any benefits over regular salt. But it’s pretty cheap in bulk, it does have a bit of extra nutritional value, and it looks cool in a jar. Iodized table salt: Standard fine-grained table salt, which is mixed with iodine salts to address iodine deficiencies. Low iodine levels are associated with goiters and intellectual disabilities. The iodization of table salt in the 1920s is attributed to a rise in IQ levels in the United States. I don’t typically use it because I think it tastes funny, but I keep some on hand in case I need a cheap source of iodine.

Curing salt: Curing salts like Morton Tender Quick are mixed with nitrites and other preservatives to cure and preserve meat. I keep some on hand, but I haven’t had a chance to get into that end of food preservation yet.

Tip: If you need a fine salt, like for popcorn, you can chop salt in the food processor.

Salt is one of the easiest things to store. It doesn’t spoil, pests won’t bother it, and it’s not affected by sunlight.

The main enemy of salt is moisture, and even then it usually takes a good deal to be a bother. Pickling salt clumps easily, so you’ll want to store it in an airtight container after opening the box. But even if it clumps, it’s pretty easy to scrape off the usually tiny amounts you need. As for my personal salt stash, I just keep it in the original box, in a high, dry place. Keep it out of basements or any area that might flood.

Some folks store salt in mylar bags with oxygen absorbers, which isn’t really necessary. You can also buy salt in number 10 cans for long-term storage, but that shouldn’t be necessary for most people.