In our recent blog post on how to make char cloth, we cover a number of the downsides of char cloth as a fire starting material: it’s fragile, and it’s useless if it gets wet. Luckily, there’s a handy device for carrying char cloth that addresses both those problems: the trench lighter (aka a “rope lighter” or a “sailor’s lighter”).

A trench lighter works by catching a spark in a charred portion of a rope. The burnt rope then works just like char cloth, turning that spark to an ember that can be used to light a larger fire (or a cigarette).

The rope is usually encased in a metal tube to protect the charred tip from getting damaged or wet, and provide a way to snuff out the ember when you don’t need it. Some models have a spark wheel attached to the side to provide the spark that will turn into an ember in the rope fibers.

Trench lighters go by many names: sailor’s lighter, shepherd’s lighter, or chucknuck. These lighters were originally invented by sailors who used them to light their pipes in the windy conditions at sea — hence the name “sailor’s lighter.”

The trench lighter became popular in WWII when it was used by soldiers. In the trenches, you could not have an open flame, like from a traditional lighter or match, as that would produce a light source that would reveal your position to the enemy. 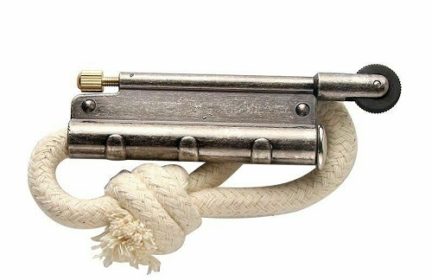 The ability to light in windy conditions while also keeping a low profile at night makes the trench lighter an interesting option for preppers. We’ve never heard a survival expert recommend it as first, second, or third source of fire (a BIC lighter, stormproof matches, and a ferro rod would fill those roles, respectively). But it’s worth knowing about and experimenting with, and we could see planning to rely on one if you really get proficient with it and know what you’re doing.

Rope lighters are inexpensive and widely available online, but the DIYer in you might want to try and make one. As seen here and here, there are many different ways of making a trench lighter.

A  quick summary of the homemade version of a chucknuck from forum user Jay Valencia is listed below, but check out his full post for even more details.

Jay started off by taking an empty bullet casing and cutting off the end. This opened up the bullet casing to be a hollow tube in which a rope could be threaded through. The narrower neck at the top of the casing allows the rope to be held in the tube by friction, without it slipping out the other end too easily. He tried many different materials, and finally found a 100% cotton rope that would work.

His model of trench lighter, called a chucknuck, does not have two of the features that the commercial trench lighter has. Instead of a spark wheel as an ignition source, he used a normal ferro rod. And his model does not have the little steel ball to snuff out the ember. Instead, you just hold the chucknuck upside down on a flat surface, and that creates the airtight environment that puts out the ember. 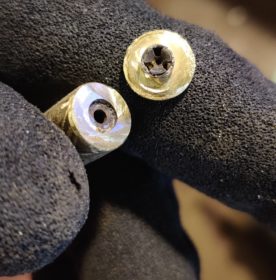 Jay also tried out multiple types of rope before having to go online and buy a 100% cotton rope designed for trench lighters. All of the others would not hold onto the ember for very long.