Punchline: Good as a gift or hobby, but not for prepping

This past summer, I was experiencing FOMO from reading all the amazing posts from Josh, Redneck, and the rest of the community, and wanted to start planting something in my backyard. I can’t plant anything directly in the soil, so I knew that my best bet was to use some kind of raised bed. Yet I was too busy to build my own or even properly research any ready-made ones. So when I stumbled upon Back to the Roots, I decided to try.

Back to the Roots is a small company based in the US that sells organic seeds, organic potting mix, and growing kits which include mushroom growing kits, hydroponics/aquaponics systems, and fabric raised beds. Their mission is to “reconnect every family and new generations back to where food comes from [hence why Back to the Roots] – no green thumb or backyard needed”, and they are B Corp certified.

Fabric raised beds are supposed to be breathable to encourage good root growth, they are easy to set up since there is nothing to build and the fabric is light, and both the beds I got can be used in a small space.

The fabric bed and the self-watering pot are made of thick felt, with stitched-in handles. The 3 cu ft garden bed has two internal dividers that make it easy to grow different types of plants and flowers or implement a square foot garden. The fabric seems durable and sturdy. The setup was very easy as all you have to do is to unfold the fabric then fill it with soil. Carrying around the soil to the bed was the only hard work I had to do.

The self-watering pot has a 5 gal capacity and includes a small terracotta Olla that holds approximately 20 oz (about 2.5 cups) of water. The stopper is rubber. 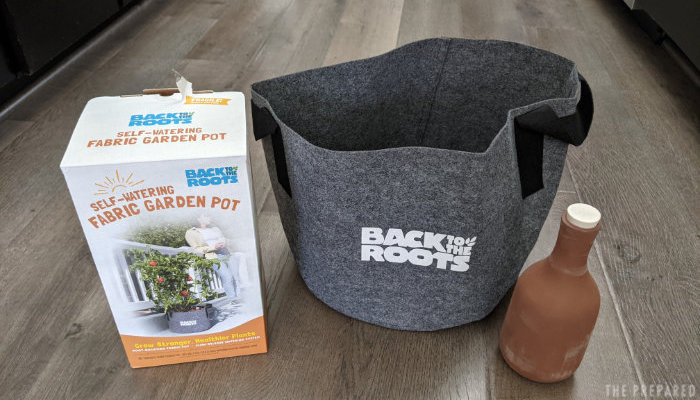 An Olla is an unglazed pot that you bury in the soil next to the plant you want to grow and fill with water for sub-surface irrigation. It is an ancient technique that has been used for thousands of years in drylands. The tomato plant grew up fine: it ended up needing regular amendments but my understanding is that that’s normal for tomatoes and so I just made it part of my watering routine. Something I realized is that only one tomato plant was not enough to provide enough produce for two people (i.e. not enough mature tomatoes to even make up a tomato salad at any given point) so we resorted to snacking on them straight from the plant as soon as they matured.

I had very high hopes for the Olla, but I don’t really know that I’ve benefited from it. I was expecting it to keep the soil moist for a few days at a time, but it turned out that I had to refill the jar almost every day and the soil wouldn’t keep moist for any longer either.

Without having tested growing the same tomatoes side-by-side in the same type of raised bed but without an olla, its impossible for me to make an accurate assessment, but I suspect that a combination of factors influenced the outcome: soaring temperatures (constantly in the high 90s – 100s), a relatively small amount of soil to ‘keep that moisture in’ (5 gal as opposed to a bigger bed, or, even better, all the soil in the world if I had planted directly into the ground), and the fact that the bed was made of fabric. Also, the Olla might have been too small for that type of setup (high heat + small fabric bed). Those beds were also on top of a cement patio, so maybe that also increased the temperature around them?

Something else I‘ve noticed is that the more I kept watering the beds, the more the soil inside it kept collapsing the sides of the rectangular bed, lowering the soil and consequently creating more shadow inside of the bed. At one point I didn’t want to add more soil since I had the radishes growing inside it, but it spoiled some of the radishes (the ones I had planted towards the sides started chasing the sun and so they never developed a bulb, just a long stem with leaves).

Notice the walls bending and how the soil movement/compacting created unexpected shadows over my plants. One of the handles also broke when I had to move the bed once it was already full. No big deal as it was my mistake deciding to do that once filled, but still a bummer.

I also didn’t realize how much I hated seeing the logo, hence why I turned the logo away from our sitting area. Now, the logo in this case makes sense in the context of their Grow One, Give One campaign, where, for every picture of a Back to the Roots garden shared on social media, they donate an organic grow kit and STEM curriculum to an elementary school classroom of your choice. But I hate when companies make the logo so obtrusive.

The grey fabric also showed water and soil stains the more I watered them. This is purely esthetic and does not affect the functionality, but was not expecting that and kept noticing it until I got used to it.

All in all, I am happy that I managed to test the fabric raised beds and the Olla. I’m still planning to use them next year and plant some of the other veggies in the seed pack (could also be a good test to see if they will still germinate).

But are they worth it for prepping?

I don’t think so. If I wanted to grow enough produce for two people, I wouldn’t rely on them. I’d need more or bigger beds and there are cheaper options out there (although I wonder how the different types of fabric compare to each other). I also keep thinking that maybe fabric beds are not the best option for my climate and if and when ready to get gardening at a bigger scale I would probably use other more traditional raised beds.

As for the seeds, I don’t have any reason to think that they do not compare to any other organic seed out there, but they seem to be more expensive ($2.99 for a pack of Back to the Roots Roma tomatoes vs $2.49 for Burpee Roma tomatoes found in Home Depot – could probably get a better deal at the local nursery).

Terracotta Ollas are expensive per se, but there are plenty of DYI instructions out there, which could prove cheaper.

Who are these for?

I think that every gardening kit offered by Back to the Roots would make great presents for kids or adults in an urban environment, or for those (like me) that want to try to grow something but don’t have the time to properly plan a garden.

Even though some of their products are more expensive than if you shopped around, they run promotions all the time and so in this specific context the prices are not as horrible. As an example, right now they offer a Hydroponic/Aquaponic kit at $100 plus 25% off sitewide, when a similar aquaponic kit at Amazon is almost $150. What I actually liked about them is that they are really trying to make things easy for people, from providing money back guarantees, to growing support, to STEM curriculum for kids which can be downloaded for free.

Bonus: check the excellent and relevant forum post from Ubique about Drought and how to prepare for food production.