I recently wrote that BaoFengs are fine radios, but they don’t have hundreds of miles of range as a reality check for preppers who mistakenly think they’ll reach loved ones far away.

But hams quickly chimed in to tell me that wasn’t true, and that you could bounce signals off satellites and reach hundreds of miles. Hams refer to that as “working satellites.”

I knew that was technically correct (you’re asked about satellite repeaters on the FCC’s ham radio examinations), but I also didn’t think it was helpful to the intended broad audience because it seems like an advanced skill past the range of “average person prepping” and into serious-ham territory.

I started to wonder if I’d missed something — if “working satellites” could indeed be helpful for establishing long-range communications in a serious grid-down scenario for average people?

The short answer is no, not really, but it could possibly save your life if you’re stranded with no other means of communication.

What you need to know:

Example test using my cheap BaoFeng to listen in on the International Space Station’s repeater, where I could hear people from 700+ miles away:

The basics of working satellites

The Earth is surrounded by a fast-growing number of man-made satellites, such as the International Space Station and Global Positioning System. Along with those are amateur radio satellites, which have been in existence since 1961 with the short-lived OSCAR 1.

Just as with terrestrial-based ham repeaters that collect and rebroadcast signals, some satellites have repeaters that let you make incredibly long-range contacts with voice or data.

Launching and making contact with amateur radio satellites is a huge subset of the ham hobby, to the point some hams focus exclusively on space. There’s an entire worldwide organization dedicated to it, called AMSAT. There’s the obvious pull of space that drives interest in this sub-hobby, and it falls under the category of “easy to learn, difficult to master.”

What makes working satellites much trickier than terrestrial repeaters is that they’re on the move. Most are Low Earth Orbit (LEO) satellites that will only be within range a few minutes a day as they zip on by your location.

The satellite won’t always come from the same direction or get close enough for you to make contact. Thanks to a phenomenon called Doppler shift, you’ll also likely have to adjust your frequencies to stay in contact. The pass times change over time as well. For instance, the ISS was passing over my area at around 2 AM in the summer and was flying over in the early evening in late fall.

If satellites are always moving, you might wonder how satellite-based systems like GPS are always available. That’s because GPS uses a ‘constellation’ of satellites to provide continuous coverage around the world. Another famous example is SpaceX’s Starlink Internet service, which will eventually have a constellation of 42,000 satellites to provide Internet access anywhere on Earth. (Disclosure: The Prepared’s owners are also small owners of SpaceX.) 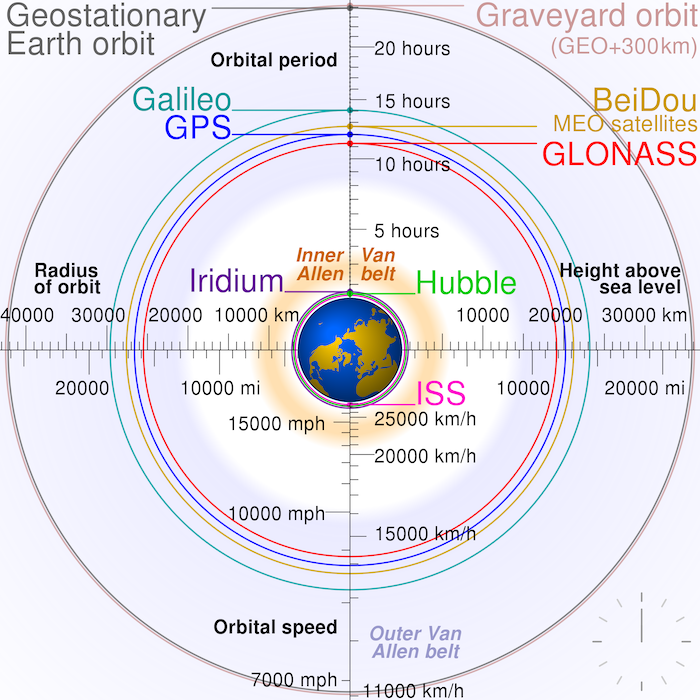 Armed with nothing but a cheap BaoFeng and a cheap NA-771 antenna knockoff, I decided to give it a whirl. BaoFengs aren’t the best radios on earth, and they’re even lousier in space.

Most ham satellites are crossband, which means they receive on VHF and transmit on UHF, a technique to extend the effective range of the repeater. All repeaters have an offset, where they listen on one frequency and transmit on another, but usually on the same band just a few kHz or MHz apart.

BaoFeng radios easily handle such offsets for ground repeaters, so that they automatically change frequencies when you transmit, but it doesn’t handle crossband repeaters well. I worked around this by plugging one frequency into the A bank and another into the B bank and switching between them. I also tried wielding two radios, but I found that too clunky.

The next challenge was picking satellites to target and figuring out when to listen in to them. I decided on two: SO-50, which was specifically cited by a reader, and the International Space Station.

To track them, I used the ISS Detector app on my iPhone (it’s also available for Android), which tracks satellites and can notify you when one is within range. Out of the two, I had the most luck with the ISS. SO-50 passes by often, but only for a very limited time, while the ISS only passes by once per day but is within range for several minutes. Plus the ISS gained a new voice repeater in September, so it’s very hot right now.

During my week of satellite work, my family thought I’d lost my mind as I bolted out the door several times per day with my radio in hand. Working satellites makes you feel as though you’re stranded on a desert island and desperately trying to flag down passing planes.

This is not a sit-down affair. I held my iPhone in one hand, tracking the satellite’s progress with a combination of its live map and augmented reality satellite tracker, which painted the satellite on my phone’s viewfinder. When it got into range I’d start waving the antenna in its general direction until I started hearing something besides static. As the satellite moved across the sky I’d have to adjust the radio to stay locked onto the signal.

I’m not sure if I successfully made contact with anyone through these satellites, but I did pick up a number of transmissions, including one from an operator about 700 miles away in Texas.

All in all, I consider the experiment a success… and proof that this is not a great way to establish long-range comms.

Because these satellites move quickly, there isn’t a lot of time for conversation. The talking you hear in the video above is fellow hams trying to swap callsigns and locations so they can track it in each other’s log books — part of their fun is tracking who they reached and how far away they are.

In fact, trying to “ragchew” on satellites is discouraged because multiple hams are trying to make contact in a very limited time window. As Keith Baker (KB1SF/VA2KSF) explained in an article for AMSAT Journal:

During the [brief satellite] pass, you’ll probably hear one or more hams simply saying hello or exchanging their Maidenhead Grid Square numbers. Indeed, most conversations on AO-51 are usually very brief “hello – and – goodbye” exchanges similar to an HF DX exchange so as to give the many others listening in, a chance to work the bird. As you might guess, long-winded rag chews are not welcome on the FM birds.

So not only do you not have much time to access the satellite, they’re also very busy. But even if those weren’t impediments, trying to establish a two-way link this way would be a nightmare.

And that’s all assuming that the satellite is working. AO-51, which Baker mentioned in his article, ceased transmission in 2011 and no longer responds to commands. There are dozens of satellites that are inactive at any given time, just waiting for their inevitable fiery death.

At best, you and a distant partner could use these satellites as a beacon, passing back call signs as a sign of life.

Satellites as a desperate call for help

I thought I was maybe overlooking something, so I asked Clint Bradford (K6LCS), proprietor of work-sat.com, and this is what he had to say: “The amateur radio satellites’ passes will RARELY coincide with one’s emergency event… no one should be [relying on] the current satellites in emergency plans.”

However, Bradford did mention an incident a few years ago where a ham drove off a trail and managed to make contact through a satellite.

It’s conceivable that if you were in trouble in the wilderness and could not call for help by other means, you could send a distress signal to a satellite. You would either have to somehow know when the satellite would be in range or you would have to just call it repeatedly and hope someone heard you before your battery died.

You would also need to know your Maidenhead grid locator so you could tell others where to find you. In fact, if you’re traveling into the field with a radio, it’d be a good practice to look it up and write it down in advance in case you need to share your approximate location.

I would just give the callsign once and then repeat “EMERGENCY” and my coordinates repeatedly. Any operators listening in would understand that there is an emergency at that location, look up the grid square, and contact authorities to pass the message along.

The key would be to convey that there is an emergency and to accurately relay the coordinates. If you’re a ham you’re hopefully familiar with the phonetic alphabet, which is helpful for clear communications over static. I would repeat the grid location in both alphanumeric and phonetic forms like so: “EMERGENCY. BL11bh16. BETA-LIMA-ONE-ONE-BETA-HOTEL-ONE-SIX. EMERGENCY. BL11bh16. BETA-LIMA-ONE-ONE-BETA-HOTEL-ONE-SIX.”

But I can’t stress enough how much of a last-ditch effort this would be. This is assuming there is no terrestrial repeater within range, that you could make contact with a satellite, that the satellite is working properly, someone hears you, they correctly transcribe your maidenhead coordinates, they contact the appropriate authorities, and those authorities come to look for you. It’s a long shot, but better than no shot.

If you have an interest in ham radio and have a handi-talkie laying around, I encourage you to track down a satellite and at least try to listen in sometime. If nothing else, it’s one of the more exciting aspects of ham radio and is a good trick to have up your sleeve.

For the rest of us, there may be a point in the future where satellite-based services like Starlink may make it so that anyone with a smartphone can call for help from anywhere in the world.