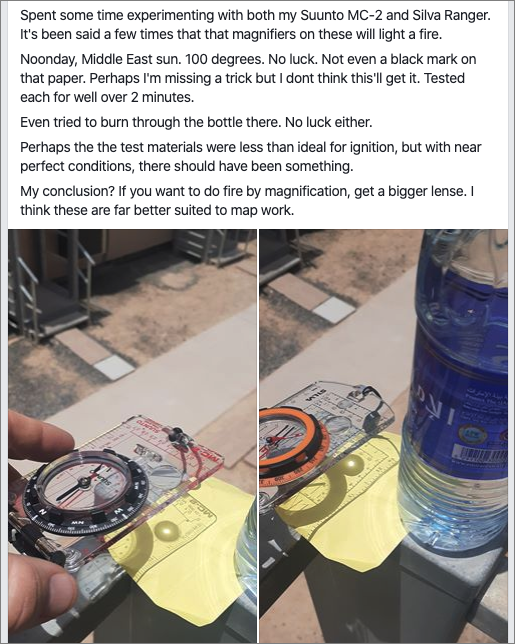 The technical term for starting fires with magnifying glasses is “solar ignition.” Bushcrafter Dave Canterbury is a big proponent of starting fires this way. He explains in Bushcraft 101:

From the point of view of resource management for your kit, the magnifying glass or “sun lens” is really the best fire-starting method. If the sun is shining, you need only natural materials to make an ember. If you have made charred material, this will be easily ignited in seconds by the sun.

Whenever you use a lighter or even a ferro rod, you’re consuming some part of that firestarter. However, with solar ignition, you only consume the tinder. The downside to solar ignition is that it has a number of necessary conditions:

The key to solar ignition is properly focusing the beam of light to be as tight as possible. This isn’t something I can teach you in a blog post, you just have to experiment and figure it out for yourself. You want the smallest, brightest dot of light you can manage (you can see examples of this below). Properly focused, sunlight can light a dry, dark bit of tinder in seconds.

When practicing your technique, take care to not stare directly into the dot, because it’s pretty much like staring into the sun. Look at it just enough to get it focused, and then look away while holding your hand steady.

If you keep a magnifying glass in your go-bag, you should practice with it, because solar ignition is a tricky skill to master. Once you get the hang of creating an ember with solar ignition, you then need to practice putting it into a bird’s nest and stoking the embed into a full-blown fire. But it is doable!

Back during the heyday of the fur trade, Hudson Bay produced and sold solar-powered tobacco boxes. Men would carry tinder and tobacco in the box, and a magnifying glass was built into the lid, which they would use to ignite their pipes. So this isn’t at all a new idea. You can buy replicas of the Hudson Bay tobacco boxes today if you want to go old school. But can a compass start a fire?

In short, yes! There are many YouTube videos from reputable channels demonstrating the technique.

Here’s a thorough video from Dave Canterbury demonstrating starting a fire with a K&R Alpine compass.

Here’s a quick video from Black Scout Survival showing how to start a fire with a Suunto MC-2 compass.

So it’s definitely doable. I decided to try it out for myself. I carry a Bruton TruArc 15 compass in my go-bag so that’s what I used. I also carry a small fresnel lens in my wallet, which I have reliably used to set things on fire.

I first tried lighting some dried hay on fire. The compass did pretty much nothing, so I tried my trusty fresnel lens. After several minutes of experimentation, I made a dark spot on a piece of hay, but no fire. Again, dark tinder will work better.

I didn’t have char cloth handy, but I did have some charred materials around. I tried some leftover smoker pellets. Again, the compass did nothing, but the fresnel lens got them smoking in a few seconds.

Finally, I brought out the big guns. I have a bag of matchlight charcoal sitting around, which comes pre-soaked in lighter fluid. I figured that would be a pretty good fire-starting medium.

I set up two coals on top of a fence post so there would be good access to the sunlight. I trained the compass light on a coal for a few minutes but got no ignition. However, just a few seconds of the fresnel lens got it smoking. I didn’t let a full fire form because my yard is currently covered in hay mulch and I didn’t want to set my yard on fire. But the concept is the same. Can you start a fire with the magnifying lens on a compass? Yes, I believe so, because there are certainly enough demonstrations of the technique from legitimate survivalists. However, I don’t think it’s the best tool for the job.

I recommend buying little fresnel lenses in bulk. The ones I have only cost $1.50 each and come in a handy carrying sleeve. I got ten in the pack, so I have enough to toss in go-bags, wallets, vehicles, etc. And they’re super effective, able to start a fire in seconds even without much practice.

Interestingly, the fresnel lenses I carry only have 3x magnification. I also struggle to focus the light into a tight dot — it usually comes out in a narrow dash. Despite that, it starts fires quickly, likely thanks to the relatively large size of the lens.