You’re ready to buy your first gun, but there are so many options with confusing labels and features that it can be overwhelming. Experts explain what to look for (and avoid), plus specific product recommendations depending on your situation.

Although it doesn’t really affect the overall answer as much as you might think, we do consider emergency preparedness needs in addition to general “what’s best for a beginner?” advice, since many people’s first gun will also be their only gun and thus does double duty as a prep.

If you’re not sure yet what terms like “caliber” or “magazine” mean, or why we stick with the most common calibers like 9mm and .223, check out the total newbie’s guide to guns.

It’s impossible to pick one or two specific firearms that are the best for every beginner. Instead, it’s more helpful to say which types are the best, then give a few top choices within each category.

Most beginners should pick from one of these categories for prepping or self-defense. Some tips on narrowing down which category is right for you:

If you or the intended shooter are on a tight budget, a minor, physically weak or disabled, or just skittish about guns, you may want to choose a pistol or rifle that uses the uber-beginner-friendly (and cheap) .22 Long Rifle ammunition type. You sacrifice power, but it’ll still stop a close-up bad guy with a well-placed shot or take small animals while hunting.

If you live in an area that heavily restricts or bans pistols and rifles, you could consider a shotgun, lever-action rifle, bolt-action rifle, or air rifle.

If you live in a place like California that allows weapons like AR-15s as long as they are heavily modified/crippled, it’s still often better to stick with a crippled AR-15 than abandoning the idea of a common-style rifle altogether. Work with your local gun shop to buy a California-compliant AR-15.

Shotguns are legal in every part of the US. Some states, like New Jersey and Rhode Island, only allow firearm hunting with shotguns.

Some beginners have a movie-based perception that a shotgun blast spreads out really wide, to such an extreme that all you need to do is point it in the general direction and you’ll hit your target. Real life doesn’t work that way, even though the shot does spread out in a (limited) cone.

That makes shotguns good for hunting small game — it’s easier to hit a flying bird with a cone of smaller ‘bullets’ than a single larger one, for example. You can use a type of shotgun ammo called slugs that, instead of a cone, shoots one larger ‘bullet’. Slugs can make a shotgun somewhat effective at taking down larger game such as deer.

Bolt-action rifles are also legal in every US state. They’re almost always used for hunting and precision shooting — less so for defense — but if you’re heavily restricted by law and don’t want a shotgun:

Why you can trust this

I’ve been a firearms instructor for four years, teaching a diverse range of students from total beginners to professional marksman and high-level industry personnel. Besides my day job as a researcher at The Prepared, I also own a successful firearm parts manufacturer and consulting company. My articles have been featured in The Firearm Blog, Guns America, Small Arms Review, Small Arms Defense Journal, and more. I have attended numerous armorer courses and have unique expertise in long-range shooting and the AR-15/M-16/Mk18/M4 family of weapons.

What to look for

A mix of general and preparedness criteria:

It’s tempting to get a super-cheap “beater” for your first gun. But it doesn’t cost much extra to cross over from “throwaway beater” to “good enough for prepping,” so don’t skimp too much unless you’re already confident you’ll end up buying more models later.

Vice versa, you don’t have to go “Gucci” and buy the most expensive models. It’s fine if you do. But the extra money you’re spending won’t make much of a difference in your shooting ability until you’ve gone through a bit of training/practice — ie. an extra $1,000 on your first rifle isn’t going to make you more accurate, since the vast majority of your beginner accuracy or performance problems will be due to skills, not gear.

Versatility matters a lot in prepping. If you only have one firearm, you want to feel capable in as many situations as possible: shooting targets near and far, being on the move, being in a fixed position, and so on.

A shotgun, for example, might do fine at home defense when everyone is in the same room, yet fall short if you’re inside the building defending against outside people.

Some guns have more of a “love or hate” reaction once people actually hold and use them, while others tend to be more universally accepted. It will take a lot of shooting and trying different firearms for beginners to develop that feel.

So part of how experts chose the recommended guns in this guide was considering which models are more universal or one size fits all. You should feel confident buying any of the models in this review online, without having held them first. 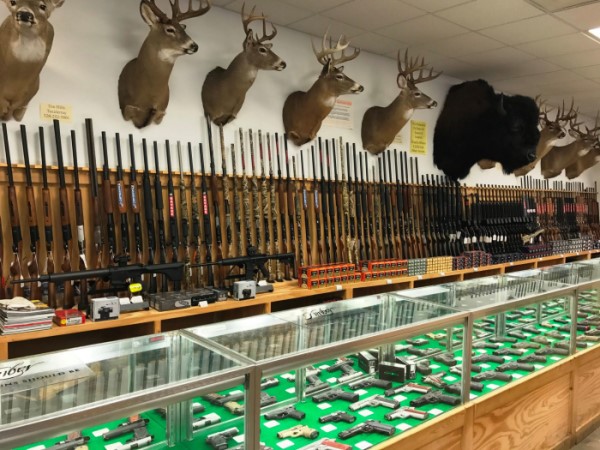 That said, it never hurts to hold (and if possible, fire) a weapon before buying it. Especially if your hands are unusually large or small.

The holding part is easy. Just take your shortlist of candidates to a local gun store and ask to see them. Almost any gun store will have a Glock 19 or basic-pattern AR15, for example, and you can call ahead to ask.

Firing before buying is harder. If you don’t have a friend with existing firearms, Google “gun rental (nearest city)” to find shooting ranges with rentals that are open to the public. If you’re going to go, it’s worth the extra money to try multiple guns. You’ll quickly get a feel for basic likes and dislikes.

Tip: If you’ve never shot before, don’t be embarrassed about saying so and asking for help. They want to help! Some of these gun ranges with rentals will also offer a short beginner lesson (for an extra fee), so you could hit two birds with one stone in the same trip.

Do you need more than one gun?

You’ll be fine if you only buy one, especially if you stick to the criteria or recommendations in this guide.

However, there’s a lot of value in having two because you can have one pistol and one rifle — that combo will cover almost any need you have and reduce the risk that one thing you buy becomes illegal in your area.

If you then got a third firearm and you’re mostly thinking about preparedness, a shotgun would complete the tripod.

Some new shooters struggle to hold up and fire certain kinds of weapons. The form factor of the weapon itself could be an issue (eg. a big heavy rifle vs. a compact rifle) and/or certain calibers can make the ‘bang’ harder to control.

Focusing on the ammo:

Then there’s the weapon itself. Pistols are obviously the easiest: A pistol might only weigh two pounds vs. a rifle at eight pounds.

That might not seem like a big difference, but try to hold a few pounds in your hand with your arm extended out and parallel to the floor — at some point you’ll start to struggle. And if you’re on a patrol, scout, or just bugging out on foot, those extra pounds might make a difference for someone on the weaker end of the spectrum.

While pistols are generally better for people concerned about physical ability, there are some exceptions. The big example is that pistols only have two points of contact: your two hands holding the pistol away from your body. A third point of contact, which is usually the buttstock of a rifle or shotgun held up against your shoulder, not only greatly improves accuracy and general control, but some people find it easier to hold a heavier weapon with three points of contact vs. a lighter weapon with only two. 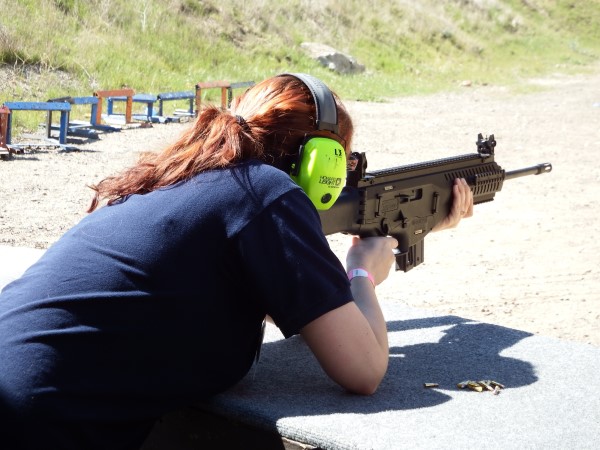 There are add-on accessories or built-in features that can make weapons easier to hold. Unfortunately, some of the more restrictive US states (California being a prime example) outlaw those features. Politics aside, most politicians who write anti-gun laws don’t understand how guns work and end up hurting more than they help. Consider the add-on vertical foregrip shown above. That makes it easier for your off-hand to support the barrel. Many women and those with less strength depend on those features to be able to use their weapon effectively and safely — or at all. But anti-gun lawmakers interpret it a different way: If the feature makes the gun easier to use, that means it’s easier for criminals, and thus the feature is bad for everyone. If you only have one functional arm, there’s good news: Amputated veterans returning home in recent years have catalyzed a new product market of “braces” that make pistols and some rifles functional with only one arm. Thankfully, the government recognized the valid need for those braces and have made them legal for everyone!

First gun for prepping in California