A quality battery charger is the most important factor in getting the maximum rated lifespan and performance from your rechargeable batteries. Cheap chargers can overcharge and thus overheat your batteries, stealing away charge/recharge cycles and shelf life that you paid a premium for and might depend on in an emergency.

Not only is a charger a critical part, it’s a relatively fragile electronic device that isn’t design for hard use in emergencies. That should cause your Spidey Sense to tingle because you don’t want to build a prepping plan around a single point of failure.

We solve that by having more than one charger across the sum of our emergency supplies and by naturally having others kinds of batteries and tools on hand — including ways to survive without any batteries at all.

Survival experts think about chargers in two categories anyway, which makes it graceful to buy one of each and have your redundancies mostly covered:

Because experts recommend using NiMH LSD rechargeables wherever you can, and lithium-ion-based rechargeables with a built-in USB charging port in other types of gear, you can get by with a charger that has support for NiMH batteries only. Nonetheless, because there are tons of regular Li-Ion batteries (with no USB port) out there that you might come across in an emergency, we strongly preferred chargers able to handle both NiMH and Lithium-Ion chemistry types for this review.

More: Confused about the different types of battery sizes and chemistries?

The two Eneloop NiMH LCD AA/AAA starter battery packs that won the best rechargeable battery review come with an included smart charger that’s actually very good. It just doesn’t have all the features for testing, cycling, and controlling the recharge rate that a higher-end charger has. Nonetheless, the included charger is good enough as an entry into daily home use with your NiMH LSD AA and AAA batteries. 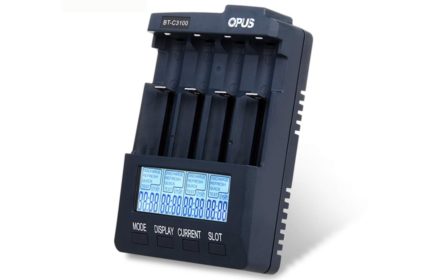 An amazing value with a sterling reputation among enthusiasts. It has many features found in more expensive chargers, and will maximize your rechargeable battery investment by prolonging each battery's lifespan.

If you didn’t get one of those included good-enough chargers, or just want a better one, the best home battery charger for preppers is the $45 Opus BT-C3100. It checks all the core boxes for a smart charger — independent charging bays and a negative delta-v charging method — plus it has overheat protection and so many other features that are normally found in more expensive competitors. With this powerful unit you can test batteries, recondition them, and manually select a charging rate. (When charging, slower is better and easier on your batteries, but sometimes you’re in a hurry and just have to get it done — so a variable charging rate is a cool feature for prepping.)

Unlike most NiMH/NiCD chargers, which can be used only with nickel-based batteries, the Opus charger will also power lithium-ion batteries. And it works with any NiMH, NiCD, or Li-Ion size you’re likely to get: AA, AAA, C, 18650, and even the more exotic and obscure sizes. One of the few chargers that works with 9V NiMH, and it's also very good. With independent charging lanes and a negative delta-V charging method, it has everythning you need.

If you went the NiMH LSD route with your 9V batteries (you should), then you’ll want to pick up the $25 Bonai 9V charger. This little unit has two independent charging bays and uses the negative delta-v method, making it perfect for keeping your 9V NiMH LSD batteries in good condition.

For those who have NiMH LSD size D cells, none of the above chargers (or the USB-powered ones, below) will physically fit a battery that large. So to charge your size Ds you’ll want the $40 EBL C, D, and 9V battery charger, which comes with a four-pack of their good-quality NiMH D cells, included.

As renewal energy products (namely solar) grow in usefulness while shrinking in price, most preppers have some way to generate or capture energy without the grid. Although many solar chargers come with their own battery pack, it’s still a good idea to have a high-quality separate one.

These compact emergency and camping generators typically have USB output ports for powering phones and tablets, so to charge your batteries with them you’ll need a charger with a USB power input. This is a beast of a charger from a reputable brand, and it can be powered by USB. So not only does it charge many different battery formats and chemistries, but pairs well with portable solar panels.

The best USB-powered battery charger for preppers is the $40 4-bay Nitecore UMS4, a beast of a charger so feature-rich that you could actually buy it in place of the Opus for a home charger — if you didn’t mind giving up a handful of the Opus’ niche features. The UMS4 auto-detects and properly charges as many different battery types as the Opus, from AA NiMH LSD to exotic Li-ion chemistries and sizes. And its size and micro-USB 2A power input make it compatible with popular solar chargers and cell phone chargers.

The best budget option is the $10 Liitokala LII-202 USB Rechargeable Battery Charger, essentially a compact version of the Nitecore from a more obscure maker. This well-reviewed little unit is very lightweight, meets our feature requirements for a NiMH charger, supports Li-Ion chemistry, and will charge any number of battery formats. We do have questions about its long-term durability, but we’ve tested it with solar panels and Eneloops and it does work. 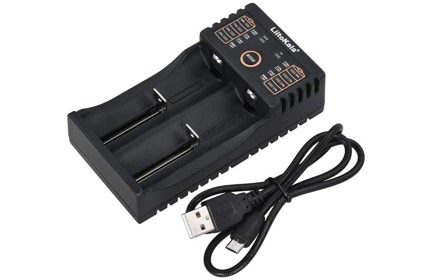 This compact 2-bay charger can handle everything from NiMH to different Li-Ion formats. Very inexpensive and capable. It's what's in some of our staff's go bags. If you have the space to spare and want to charge more batteries at once, then eight independent charging bays and negative delta-v charging method make this the ultimate budget charger.

If you want to be able to charge more batteries at once and are ok with a bulkier charger, the $12 Bonai 8-Bay USB Charger is a great, larger-sized USB-powered NiMH smart charger with the core features we require for proper battery maintenance. It has eight independent lanes that can charge up to eight AA or AAA NiMH batteries at once. If it weren’t for the fact that this charger takes up much more space in your pack than the EBL Quick Smart, it would be our budget pick.

The battery types recommend by experts — NiMH LSD chemistries in the AA size family — have special charging needs in order to perform and last as well as designed. So much so that a cheap charger can hurt the kind of NiMH batteries relevant to preppers to the point their lifespan is below that of a Li-Ion.

Cheap chargers power two bays at a time from the same source. As a result, if you put a full battery in one bay and a half-dead battery in the other, the base unit will either under-charge the former or over-charge the latter. Independently-charged bays are intelligent enough to switch each one on and off.

The negative delta-V charging method is what turn a dumbs charger into a “smart” one. The charging circuit measures the voltage at the beginning of a charging session, tracks it over time, and figures out when to taper off the charge. This keeps the battery from overcharging and overheating.

As good as these recommended chargers are, they aren’t made for the apocalypse, or even for camping and outdoor use. There are a handful of similar chargers marketed to campers that might look attractive for prepping — but they lack critical features, so we can’t recommend them. Until something more rugged comes along, the only thing to do is have multiple chargers you can reach for in case one gets stepped on by a leather-clad wasteland marauder.

A battery tester is optional, but nice to have If the power goes out for long enough, you'll eventually be scrounging batteries from remote controls, toys, and smoke detectors. There's no lighter, more compact way to figure out how much juice found batteries have left than this budget tester.

Although the best smart chargers have testing features built in, you might run into a situation where you find disposable batteries and want to know how much life they have left. Smart chargers typically can’t test disposables, so some preppers add a separate tester to their home supplies. We like the $6 Amprobe BAT-200, an inexpensive and lightweight unit that can test most common types of replaceable batteries. 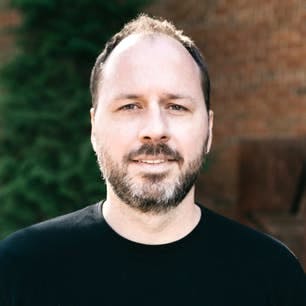 Jon Stokes is a co-founder of Ars Technica, founding editor of AllOutdoor, and contributing editor to The Firearm Blog. Jon's a lifelong knife collector, outdoorsman, and prepper. Joe has degrees in Electrical Engineering and Computer Science, but has since had a diverse career. He has posted many guides and in-depth articles at FilterJoe.com on subjects where he has extensive expertise. Youth baseball is one of those subjects. AA/AA batteries and chargers is another.