I took a deep dive down the flashlight rabbit hole

Several weeks ago I posted a query asking for flashlight suggestions, and shortly after went down a deep rabbit hole researching and testing out several models. If it’s been a few years since you’ve shopped for a flashlight, you’ll find that the days of conventional battery powered flashlights have been augmented with an overwhelming selection of new, specialized rechargeable LED flashlights that offer an array of bells and whistles. It’s clear that the boom in battery technology that’s been fueled by smartphones and electric cars has also benefited the flashlight industry.

While I make no claim of being an expert, below are some guidelines that might help you navigate the overwhelming world of modern-day flashlights, plus some thoughts on a few models I purchased and tested myself. I will note that I’m coming at this from the perspective of a prepper, and not simply trying to identify the brightest or fanciest flashlight out there. One of the first choices you’ll need to make is whether you want a basic flashlight powered by “old fashioned” standard batteries, or a fancy new USB rechargeable flashlight that comes with a specialized proprietary battery. Speaking purely of measurable metrics, the new USB flashlights are superior in just about every way, but lack the convenience and assurance that comes with being able to stockpile and swap out cheap, easy-to-find standard disposable (or rechargeable) batteries. Before choosing one over the other, it’s important to understand the pros and cons of each, as well as having a good idea as to how you intend to use, and power, the flashlight.

When making a selection, it is important to envision how you will power, and potentially recharge, your flashlight. One advantage of the USB rechargeable flashlights is that, in a power-down situation, they can be charged with a USB power-brick, portable solar or hand-crank charger, or with a car charger. It is important to note that some flashlights come with their own proprietary chargers, which often offer faster charging but will leave you in the dark if you are separated from the charger. Other flashlights come with more common micro-USB or USB-C chargers, which are easy to find but may not charge as quickly. Before investing in a USB rechargeable flashlight, it’s worth tallying all of your USB-chargeable devices and inventorying the types of chargers you’re already using to see how this new device might fit in. But, if all this talk of USB charging sounds overly complicated, or you are already invested in some standard rechargeable batteries, then sticking with traditional flashlights may be the way to go. (For a deep dive into rechargeable batteries, I highly recommend this article: https://theprepared.com/gear/guides/battery-basics/). How you intend on using the flashlight will also dictate how bright your flashlight will need to be. “Lumens” is a technical term used to describe the brightness of a light. A lumen is a unit of measurement wherein the higher the number, the brighter the light. High-power flashlights (1500 lumens and up) are ideal for outdoor use, and can be used to blind an attacker in a self-defensive situation. But you’d never want that kind of brightness for reading, digging through a BOB, or illuminating your fusebox in a dark basement. For situations in which you need to simply illuminate what’s immediately in front of you, a lumens rating of 50 to 100 will likely suffice. Many flashlights also offer a “firefly” setting (usually less than 3 lumens) which can often be enough light to get you through an emergency while allowing your battery to last for days.

Adding to the complexity is the flashlight’s “beam pattern,” which indicates how the light is directed and dispersed by the shape of the flashlight’s reflector (the mirror-like surface directly behind the bulb). Most flashlights have a beam pattern that combines a focused center with an ambient flood, and are useful across a number of situations. Specialized high-intensity flashlights have a focused beam pattern like a spotlight and are best suited for hunting and search-and-rescue type situations. Both lumens and beam pattern play a role in the overall distance the light will travel, so if you’re comparing flashlights and you find one that has lower lumens but a further throw than another, it’s likely due to its beam pattern. Don’t jump to the conclusion that the higher the lumens, or further the beam distance, the better the flashlight. For most preppers, an adjustable flashlight with low/medium/high settings (with a range of 3 lumens to 1000 lumens) will be a solid choice.

Good choices for a hand-sized USB rechargeable flashlight for your home, car, or BOB:

Thrunite TT20: I like this flashlight because of its versatility and wide range of brightness settings. With what’s essentially a built-in dimmer switch, you can adjust anywhere between 31 and 1468 lumens, plus it has an additional .5 lumen “firefly” setting and a staggering 2526 lumen “turbo” mode for emergencies and self-defense situations. It uses the newish and common USB-C charging cable (the same USB cable currently used for most Android smartphones) and charged faster than other USB models I tested. It is waterproof, impact resistant, and feels good in the hand. While it’s too big for pocket carry, it will easily fit in a bag or pack. The dual switch system takes a minute to figure out, but overall this is a great hand-sized, versatile flashlight.

Thrunite also offers a “tactical” version of this model, the BSS V4, which offers very similar lumens settings, but also has a pointed ‘strike bezel’ which would literally allow you to use this flashlight as a weapon, as well as an attachable red filter for light concealability. The downside, at least for now, is that the BSS V4 appears to be a generation behind the TT20. It’s still using a micro-USB charger (as opposed to the TT20’s USB-C) and it neither charges as fast or holds a charge for as long. Comparing these two lights made it clear that flashlights are now like smartphones, with improving upgraded models released faster than you can keep up with. Another USB flashlight I tested and liked was the Streamlight ProTac HL, a real workhorse. It has high, medium, and low settings of 1000, 380, and 65 lumens, as well as a strobe setting for emergency signalling. It’s a bit bigger and heavier than the Thrunite, but it’s simpler to use and rugged as they come. It uses a micro-USB charger, which is extremely common but also a bit dated. My favorite thing about this light is that it puts itself into low mode as the battery nears empty, so you have some warning before the battery dies.

If the complexity of USB rechargeable flashlights seems a bit too much, or if you’re already invested in standard rechargeable batteries, here are a couple choices you can’t go wrong with:

MagLite Mini Pro LED Flashlight: Simple and dependable, MagLite has been in the flashlight game for a long time. Powered by 2 AA batteries, the MagLite Mini Pro pumps out 332 lumens, a fraction of what the above mentioned flashlights offer but still plenty of light. MagLites are also one of the few flashlights that you can easily adjust the beam pattern, allowing you to shape the light to fit your exact needs. I’ve had one of these for years and it’s rock solid.

ThruNite Archer 2A V3 Flashlight: Similar to the rechargeable USB Thrunite listed above, the Archer 2A V3 has high, medium, and low settings of 500, 70, and 17 lumens, as well as a .2 lumen “firefly” mode and 400 lumen strobe. This popular flashlight is lightweight and powered by 2 AA batteries.

It’s important to note that pocket-sized flashlights are not going to offer particularly long battery life, so they’re not great as primary flashlights, but their portability makes them perfect for EDC and get-home bags.

Olight S1R Baton II: There is no denying the popularity of Olight, who make a wide array of excellent flashlights. Not much bigger than a tube of Chapstick, their S1R Baton II offers a staggering 1000-lumens max setting, as well as four additional settings ranging between 600 and .5 lumens, which is truly impressive for its size. It’s two-way clip also allows it to easily ride in your pocket, or be clipped to the brim of a hat for hands-free use, potentially replacing a headlamp. My only gripe is the proprietary magnetic charger – it charges quickly, which is great, but if you are separated from the charger you’ll be hard-pressed to find a replacement.

ThruNite T1: The only reason this is a runner up to the S1R Barton is because it is slightly bigger and heavier, which is significant when you are talking pocket-sized EDC. But otherwise this little flashlight packs an impressive 1500 lumen “turbo” max setting, as well as dimmable high-low settings ranging from 685-15 lumens, as well as a strobe and .5 lumen “firefly” mode. Another big difference is that it uses a micro-USB charger, which isn’t nearly as fast as the Olight’s magnetic charger but would be infinitely easier to replace if need be.

A good option for a Keychain Flashlight

OLIGHT I1R 2 Eos: If for whatever reason you can’t EDC a pocket-sized flashlight, OLight’s I1R 2 Eos keychain light packs an impressive 150 lumen brightness in a flashlight no bigger than a pen cap. Charged via a micro-USB cable, this little beamer is a no brainer for anyone wanting to be prepared when the lights go out.

The brightness and features of the newer USB flashlights are truly impressive, and the varying options allowing one to easily recharge while on the move are an obvious plus. It’s also clear that this new battery technology is the wave of the future, and we will continue to see improvements and new innovations at a blistering pace.  However, there is no denying the value of ubiquity, and the simple fact that standard batteries can be found in every convenience store, or or cheaply stockpiled, makes it clear that traditional flashlights still hold much value.  Ultimately, the best choice from a preparedness point of view may be “all of the above,” or at least some level of diversification that considers both the immediate and long-term challenges that we hope our flashlights will resolve.

I look forward to hearing everyone’s own flashlight insights and recommendations, and while I’m no expert, I’ll try to answer any questions that anyone might have. 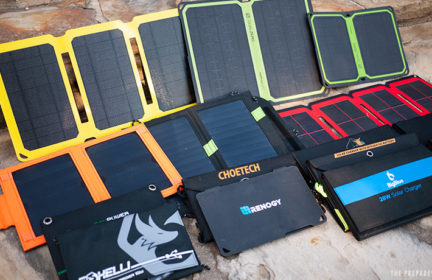