Although an electromagnetic pulse that kills electronics in a wide area is relatively unlikely, it is still realistic and one of the more serious scenarios you can prepare for. One of the most effective ways you can protect your electronics is by putting them in a Faraday cage — a scientific concept that blocks the incoming pulse from hurting the gear inside.

These shield containers come in many shapes and sizes, including huge industrial ones that house critical infrastructure. You can make your own, but it’s difficult to know if you’ve done a good job because most people don’t have any way of testing, and real-world events are rare.

There is a lot of pseudoscience and old wives ’ tales out there wrapped in fear-mongering sales tactics.

A common problem, for example, is leaving small cracks in the container that let energy waves through. This is a problem in the big expensive industrial units too, where testing shows that even small cracks in the seams where the metal edges were joined/welded can be enough of a ‘crack in the armor’ to make the whole cage worthless.

Dr. Arthur Bradley is a NASA engineer and prepper who authored Handbook to Disaster Preparedness for EMP Attacks and Solar Storms. He also has a YouTube channel where we found a neat DIY experiment:

There are a few ways you can test an EMP enclosure at home, such as sticking a cell phone inside and trying to call it. If the phone doesn’t get a signal, that’s an easy sign outside waves were blocked.

But Dr. Bradley has something most of us don’t: professional test equipment and the know-how to use it. With a signal generator, amplifier, antenna, and spectrum analyzer he was able to thoroughly test a DIY and store-bought solution.

Here are the materials used for the DIY trash can. Note that it’s important to use a galvanized steel can and lid:

I also like to toss a cheap moving blanket into my large EMP can. This does two things: 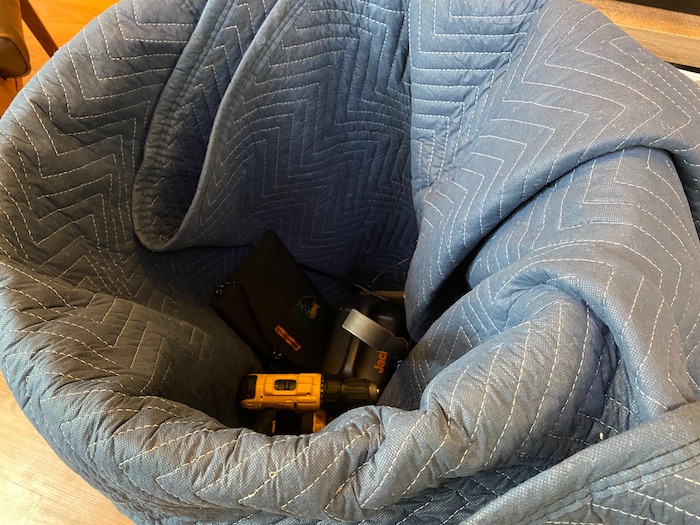 You don’t necessarily need that extra electrical insulation, but it’s cheap insurance. Most devices are pretty well insulated, but if metal on a device (like an antenna) is touching the can when the can is hit with an EMP, that could fry it.

To get a baseline, Dr. Bradley transmitted a signal at 500 MHz to a measuring device called a spectrum analyzer.

He then put the spectrum analyzer inside the plain garbage can (unaltered from the store). The basic can and lid only provided 18 dB of shielding. That’s a bad number — you want 40 to 50 dB of shielding to be effective.

The major problem was the tiny gap between the lid and the can. So Dr. Bradley sealed that gap with cheap foil tape from the hardware store. The next test worked much better, measuring 40.4 dB of shielding. Decibels are logarithmic, so that’s about a 13x improvement!

That could work if you want to store some gear and never access it until after an EMP, but it’s obviously inconvenient if you want more frequent access.

So, in a different video, Dr. Bradley put a conductive gasket on the inside of the lid, where the top bends to the sides. Not only does the gasket not hinder access to the inside of the can, but he saw dramatically better shielding: more than 52 dB.

There’s only one small issue with Dr. Bradley’s approach. In the first video, he transmitted a 500 MHz signal, while in the second he transmitted a 100 MHz signal. I’d like to see him redo the test with equal frequencies, but it probably didn’t skew the results too much. The can-only shielding measurement in the first test was 18 dB and 17 dB in the second test, which indicates the results would be consistent anyway.

If anything, the second test was more stringent. As every ham radio operator knows, lower frequencies are more apt to penetrate structures. Higher frequency VHF transmissions are easily blocked by foliage, terrain, and buildings, which isn’t a problem for low-frequency HF transmitters. Still, it’d be nice to have a test with the same frequency.

Engineer and ham radio operator Josh Nass used that same EMP gasket for his “tactical trashcan” ham radio kit. Instead of a large trash can, he opted for a small six-gallon can with a locking lid. That’s a good option for a smaller space, or a secondary kit.

Instead of a moving blanket, Nass lines the inside of his can with cardboard and bubble wrap. That takes a little more effort than shoving in a blanket, but it’s cheap enough.

One thing to point out is that Nass mistakenly claims that a solar EMP will fry small electronics, and the current science says that isn’t the case. Though I guess if you’re going to make an error, it’s better to err on the side of caution.