It’s a classic children’s science experiment: insert a nail and a penny into a potato and use the slight bit of voltage produced to power a small clock or some other low-power gadget. Those of us of a certain age may remember MacGyver pulling off a similar trick. When I was a kid, I would put a nail and a penny in an apple and rub a headphone plug along them to make static noises.

Recently, someone shared an article in one of my prepping groups claiming that boiled potatoes can power a light for 40 days. The article even claims that this could have helped Texans affected by the recent winter storm blackout. The science behind potato batteries

Alessandro Volta made the first battery in 1800 by putting a piece of zinc and a piece of copper into a brine. The zinc and copper pieces served as electrodes and the brine acted as an electrolyte. An earlier experiment by Luigi Galvani demonstrated that putting pieces of copper and zinc on a frog leg caused it to contract. In that case, the frog leg was the electrolyte. (Galvani’s experiments inspired Mary Shelley to write Frankenstein.) This sort of battery is today known as a voltaic or galvanic cell.

The potato doesn’t actually provide any electricity itself, it merely serves as the conductive medium. The metals very slowly dissolve in the conductive medium, giving off free electrons that seek a more attractive, stable home. In the typical experiments, it’s zinc dissolving and its electrons flowing to the copper. Other metals can be used, but both must be of different types.

In home experiments, the most common materials are nails and pennies. Nails are typically galvanized, or covered in zinc, to keep them from rusting, and pennies are an easy source of copper. So you can stick a nail and a penny in a potato or lemon and get a tiny amount of voltage. Eventually, the battery dies because either the zinc is depleted or the electrolyte is used up.

There are even low-power clocks you can buy for kids that can be powered by these homemade batteries.

The claim about boiled potatoes

In 2011, Israeli scientists made some truly incredible claims about potatoes. They said that by boiling a potato for eight minutes, slicing it, and then inserting each slice between copper and zinc plates, they could make a battery sufficient to power LED bulbs and light up a room.

The concept behind boiling the potatoes makes some sense. The scientists claimed that softening the inner potato reduced the resistance and let the electrons flow more freely. As for the concept of sandwiching the potato slices between metals, that’s nothing new: Volta did the same thing in the 19th century, except he used paper soaked in salt water instead of potatoes. That sort of electrolyte sandwich battery is called a voltaic pile.

It’s ten years later and people clearly aren’t jamming light bulbs into potatoes, so what happened? In a BBC interview, the scientists claimed that it was government red tape and rules about not wasting food getting in the way of powering the world with potatoes.

I recently had some electrical work done, so I had everything I needed to test this in a scrap pile: copper wire, nails, and a light bulb socket. Plus, I have a bag of potatoes, a multimeter, hookup wire, and alligator clips.

I started out by sticking a nail and a bit of copper wire into opposite ends of the potato (It’s important that the electrodes don’t touch). I then measured the voltage with a multimeter. I consistently read about 0.46 volts — not even half a volt. I pulled a few less power-hungry parts out of my son’s Snap Circuit’s electronics kit: a small lamp and an LED. The potato powered neither.

I fixed up another piece of wire so I could connect two potatoes together. Combined, the two potatoes gave me 0.89 volts. So again, not even an entire volt. 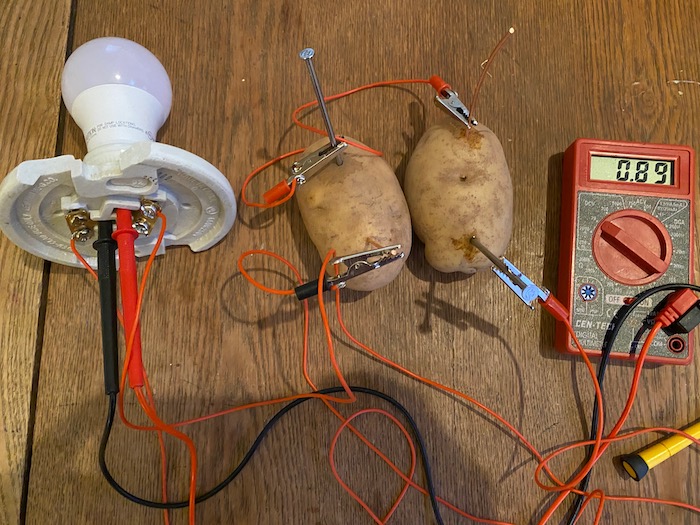 Even with double the power, nothing I connected to my potato battery worked. I decided to boil the potatoes and see if I could increase the juice.

I boiled the two potatoes for eight minutes and then put them in an ice-water bath so they’d be cool enough to touch. Once cool, I took one and inserted the wire and nail.

I measured 0.5 volts! A bump, but not much of one. I decided to connect two potatoes and see if I could get a full volt. 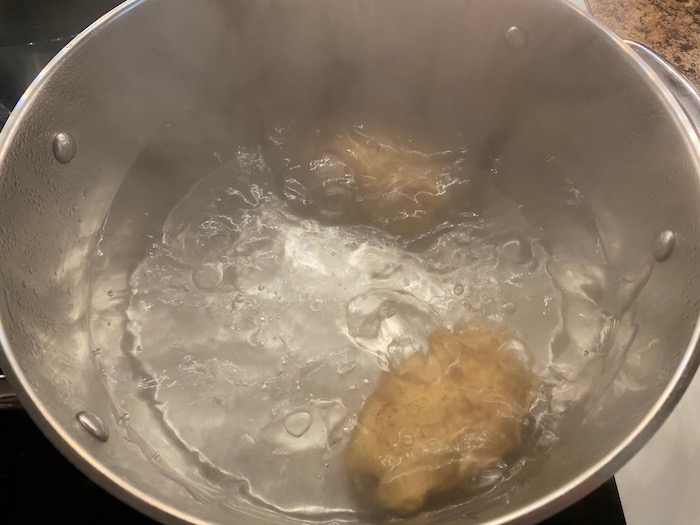 But a funny thing happened. By the time I hooked the two potatoes back up, I measured 0.9 volts from the two. I measured each one, and again I was reading about 0.45 volts. Boiling the potatoes had temporarily raised the voltage, but it dropped back down again.

So just how many potatoes would it take to make light? Thankfully, I didn’t have to waste more potatoes because there are brave pioneers who have already done so. Here’s a student at Binghamton University demonstrating using potatoes to light a single LED. Like me, she got about half a volt from each potato, so it took six potatoes to light one three-volt LED. A single LED isn’t going to light up a room. This is just completely impractical as a prep.

Since the potato isn’t actually a power source, you could slice one potato into six pieces and then hook them all together to power a single LED. But again, unless you’re teaching science to your kids, you probably have better things to do.

Here’s an extreme, but believable potato power experiment from YouTube. A guy decided that he was going to use potatoes to play the classic game Doom. He filled his entire garage with potato slices in a failed attempt to power a Raspberry Pi Zero to play Doom. After that failed, he tried powering a TI-84 graphing calculator from the potatoes, which worked. He fired up Doom on the calculator and claimed a win.

There’s one little problem with a garage full of potato slices: they rot. And rotten potatoes smell horrible. He clearly shows row after row of moldy, rotting potatoes.

However, one interesting thing sort of verified a claim of the Israeli scientists: as the potatoes rotted, the amperage increased.

So let’s put this to rest: using potato power on a mass scale is nothing short of silly:

In fact, that last point was buried in the BBC’s article. Derek Lovley at the University of Massachusetts, Amherst patiently explained to the BBC:

In reality, the potato battery is essentially like a regular battery you’d buy at the store. It’s just using a different matrix. It’s sacrificial – the metal is degrading over time,” says Lovley. This means you’d have to replace the zinc – and of course the potato or plantain pith – over time.

The fact is that potato batteries are nothing new and if they were a viable idea someone would have capitalized on it years ago.

There are probably more potato power hoax videos on YouTube than real ones. Here’s an obvious one: anything that involves directly plugging a light bulb into a potato. Unfortunately, the BBC helped spread this one with their article art.

It doesn’t take much thought to figure out why this couldn’t work. If you look at the bottom of a light bulb, there are two contacts separated by an insulator. There’s one at the bottom and the other one acts as the screw. If those two are bridged, say by potato juice, then they’ll be shorted out and won’t work. Not to mention that a single potato isn’t going to carry enough voltage to light a bulb. Another variant of this hoax connects a couple of wire coils to both sides of the potato. Again, this is nonsense. Yes, a coil can generate electricity, but only if a magnet is moved in and out of the coil. That’s basically how generators work.

Bottom line: don’t rely on silly tricks like this when the lights are out. Build up a black-out kit with electric lights, batteries, and hopefully a generator. Eat your potatoes.