Water purification tablets and other portable purifiers are a cheap, small, light, and valuable addition to your preps. After 57 hours of research for this review — including interviews with professional survival instructors and field testing for taste and ease of use — we think the Katadyn Micropur MP1 Tablets are the best choice for most people.

This review covers purification products you can buy off the shelf and stick in your portable kits, such as a go-bag, everyday carry bag, vehicle kit, etc. Many people will keep some at home as well, just because it’s nice to have lots of backups when it comes to water.

Where do these kinds of portable purification products fit into prepping? Protects against all the major threats. 30-pack is enough to purify 30 liters of water yet only weighs 0.6 oz in your pack. 4 year shelf life. EPA Registered.

The best choice for most people are packs of Katadyn MICROPUR MP1 Water Purification Tablets. Katadyn is a credible and popular brand among outdoor enthusiasts, so you’re not risking buying random Amazon mystery meat. These tablets are based on chlorine dioxide, one of the strongest antiseptics for water purification, which can kill viruses, bacteria, cysts, and protozoa such as giardia and cryptosporidium.

You get around 30 tablets for $15. Each tablet can treat one liter (32 oz) of water — so a 30 pack will sustain one person for about a week. A fundamental limitation of these kinds of chemicals (not just the Katadyn products) is that it can take up to four hours to fully neutralize everything in the water — some contaminants become safe in ~15 minutes, while things like crypto take longer to die. There isn’t a huge difference between the Katadyn tablets and similar chlorine dioxide tablets from other reputable manufacturers. The Potable Aqua ClO2 Tablets are a fine substitute for the MP1s. We’ve used and liked Aquamira Tablets, and they seem like another fine alternative, but they’re hard to find outside of their own website. Another common option is Aquatabs, which claim to treat twice as much water per 30 pack (~56 L vs. 30 L), but at the sacrifice of not neutralizing cryptosporidium.

Iodine tablets aren’t something we recommend (more details down the page). But if you really want some, buy the Potable Aqua Iodine +PA tablets.

Our opinion, and what we hear from most other survival experts, is that tabs are better than drops because you don’t run the risk of leaking fluid. The tabs just tend to be more convenient, let alone lighter and smaller in your pack. But if you’d like drops, check out the Aquamira Water Treatment Drops. 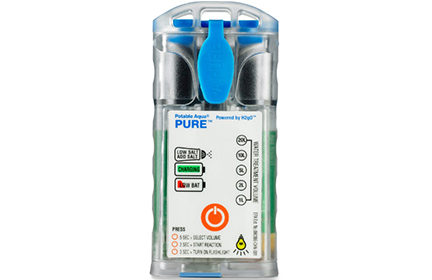 Creates chlorine on demand using basic salt and water. Can purify up to 20 L at a time. A single charge lasts for up to 150 Liters. Rechargeable battery and solar panel included.

Something new we hadn’t used before, but now think is pretty neat, is the Potable Aqua Pure Electrolytic Water Purification System. You mix common salt and water in a small container, making a sort of brine solution, which you then add to the device. You select how much water you want to purify. The machine then creates a sodium hypochlorite solution — essentially household bleach — that is just as effective for water treatment and takes as much time (most in 30 minutes, everything in four hours) as any other recommended product.

With a street price around $115, it’s obviously more expensive up front, but as long as the device holds up and you’ve got access to salt and energy, it can treat up to a claimed 60,000 liters. The kit even includes a small solar panel for backup power, although you should have a portable solar charger and portable battery power pack in your kits anyway. Great for metals and toxins:

Flocculent and disinfectant combo. Causes particulates and toxins to clump up for easy removal. The chlorine takes care of the rest. 2.5 gallons treated per packet.

The main recommendations all use a chemical mixed into the water to neutralize threats. These two picks use different methods that aren’t something we’d recommend over the basic tablets, but you might have interest or reason to buy.

Proctor and Gamble created the P&G Purifier of Water for their Children’s Safe Drinking Water Program (more info and how to donate) for countries that still lack modern infrastructure. It uses an awesomely-named process called “flocculation” combined with a standard chemical treatment (calcium hypochlorite in this case).

You pour the mix in up to 2.5 gallons of water, then shake for five minutes. Bad particles in the water get surrounded by the mixture, snowballing into bigger and heavier clumps that fall to the bottom. After letting it rest for five minutes, you carefully pour the remaining water through a basic filter (eg. a cotton t-shirt) then let it sit another 20 minutes for the “normal” treatment chemicals to finish working.

A bonus to this method over the others is that it can remove heavy metals, such as arsenic, lead, and chromium. It can also remove DDT and humic acid, both of which are common toxins in the developing world. This product has been documented to reduce diarrheal disease from 90% to less than 16% incidence in five controlled health intervention studies. Use a burst of UltraViolet light to disinfect water in 90 seconds. Kills all major threats. Struggles with cloudy water.

Specific types of ultraviolet light (UV-C) can neutralize viruses, bacteria, and protozoa. That tech has made its way into water bottles, toothbrushes, and other sterilization gadgets such as the SteriPEN Ultra. We picked SteriPEN because they’re a popular brand with validated field results, and we picked the Ultra because of its low weight among the ability to fit inside conventional water bottles. But if you want to save a little money, their cheaper models are likely fine too.

You stick the 4.94-ounce device into water, wait 90 seconds, and you’re done. The internal rechargeable battery is rated for up to 8,000 uses and can purify 50 liters on a single charge. The SteriPEN can be a great option for people with a hypersensitivity to the chlorine found in the more common products.

One problem with UV is that if the light is blocked, it can’t work. Particulates floating in the water create a tiny shadow; the light might not reach all of the water if there’s too much contamination (which is why some instructions tell you to shake during treatment). That means you’d need to filter the water before purifying, meaning a UV product by itself is limited in an emergency.

There’s a growing number of water bottles with UV purification built in, like the CrazyCap. We tend to think of those products as being better for daily use — eg. keeping it in your cubicle to make the nasty office water better — because they aren’t great for an unpredictable emergency. You might have to dip the water bottle lip into dirty water and that lip won’t be cleaned by the UV light, for example, letting your lips touch dirty surfaces.

Why are purifiers better when combined with a filter?

The main difference between filters and purifiers is that filters physically remove bad particles by pushing contaminated water through a screen with extremely tiny holes. Pure H20 makes it through, but most other things don’t.

Purifiers work via chemistry, not screens. The main benefit over filters is that some contaminants are so small they can’t be screened out, so you have to go down into the smaller molecular level. Science!

If you only have one thing, filters are usually preferred because the majority of contaminants people in modernized countries like the US and Canada need to worry about are removed with filters. In other words, a filter will protect you in over >95% of cases.

Another reason is that filters work almost instantly, while sometimes purifiers need a few hours to let the science do its thing. Another issue is that one portable filter might last for 50,000 gallons, while purifiers of the same cost, size, and weight might only treat 1,000 gallons.

This means that if you only treat water through purification, you’ll likely still have particulates floating around. You’ll survive, but that can gross out a lot of people.

A vice-versa example of how a purifier makes the combo stronger: Filters start dripping clean water immediately, but it takes time to treat large batches of water. That pace is usually fine for a typical family. But if you find yourself in a situation where you need to treat lots of water at once for a big group, purification methods scale better and can be used to treat more water that would become clean in four hours compared to what the filter could pump out in the same time.

And since most of these purifiers are just a dab of chemicals, you don’t have as much risk of mechanical or electrical failure.

What do water purifiers protect against?

Human activity is ruining water quality around the world. And even if you’re in a first-world country with a water grid that is normally safe, you still may run into issues after a natural disaster (eg. floodwaters are full of poop), Flint-style breakdown, or even local treatment plants running out of their own chemicals or budget (as we saw in the COVID-19 mess).

There are three main categories of water risks: sediments, biological organisms, and toxins. You’ll often see product marketing refer to bacteria, viruses, cysts, and protozoa such as giardia and cryptosporidium, which are just common examples of those categories.

There are other treatment products that come close — namely for distillation and reverse osmosis — but not close enough to be considered an easy off-the-shelf product most people can easily throw in a bag and use later. We’ll address those in another guide.

Simply boiling water to kill the baddies obviously worked for our ancestors, but the downside is that unless you’re capturing and condensing steam (distillation), boiled water can still have heavy metals and toxins. If you do boil, let it roll for over a minute; three minutes if you’re above 6,000 ft.

How do purification chemicals work?

Chemical treatments are typically composed of iodine, chlorine, or a compound based on either of these elements. The compounds tend to be better than pure elements because the mixes increase shelf life (around five years before effectiveness drops off), ease of use, and effectiveness.

Low-level chlorine products can be ingested indefinitely. You don’t want to drink gallons of your backyard pool, but reasonable amounts from purifying water will be fine (even when you can taste the chlorine).

Is iodine a good solution?

People with thyroid problems or pregnant women should avoid iodine.

Iodine can purify water of bacteria, viruses, and giardia in 35 minutes, but it is not effective against cysts and cryptosporidium.

Iodine comes in a liquid or crystal form. You may find iodine tablets that are marked as tetraglycine-hydroperiodide, which means they can last indefinitely until the package is opened, but then they expire after three months.

Iodine is sensitive to water temperature. That means you’ll have difficulty purifying water in colder temperatures (or just with colder water).

Silver does have antimicrobial properties — and we like some filters that are bonded or impregnated with silver — but some scammy pseudoscience peddlers have exploited that general knowledge to pitch products like colloidal silver that don’t actually help you.

Or, in the case of silver-based water purification drops, they technically work but can be toxic to your cells as it builds up in the body over the long term. That’s one reason why experts prefer chlorine-type solutions.