Ensuring our privacy and security during a crisis is vital, so its very important that we control the approaches and access to our homes and reduce light pollution that advertises our independence from the national grid power supplies. Blackout blinds and curtains (or window shutters) are an absolute must for every window and door to stop light escaping thus advertising your self-reliant position.

Multi point locking on doors and windows is a must even in normal times, but after a crisis develops you may wish to add self-adhesive laminating security film to your windows which makes gaining entry to your home via a broken window far more difficult and noisy for the intruder. It is also essential that you keep some pre-cut marine grade ½ plywood boarding to secure any windows that do get broken.

In recent years a new design of door called the COMPOSITE door has gained massive popularity in the UK, it is made of colour resistant / fire resistant polycarbonate, over wood and foam and metal core, it utilises over engineered hinges (often three or four) and much more robust multi point locking than used in UPVC doors. The door frame is of aluminium cored UPVC or Composite material and again is much more substantial than the older UPVC systems. The best versions are the government / home office APPROVED BY DESIGN types that have passed vigorous testing. Metal clad doors are also gaining popularity in urban areas.

Some people have fitted security bars that pivot or swing over the doors to re-enforce the entry points. Apparently it is remarkably easy to kick in the bottom panel on most older UPVC doors made in the UK as they were designed this way to make access for firefighters easier. Equally the locks and hinges even on expensive double glazed doors do not stand up very well to police officers using a slide hammer to gain entry to execute a search warrant, so extra security devices, bars and hinges should be considered.

Note* Very often modern double glazed doors external frames are only secured to the building wall with a couple of mild steel screws in each side, this makes it very easy to simply to pry or bash the entire door and frame out, its well worth getting high tensile steel self-tapping bolts fitted which massively increase the doors security strength. 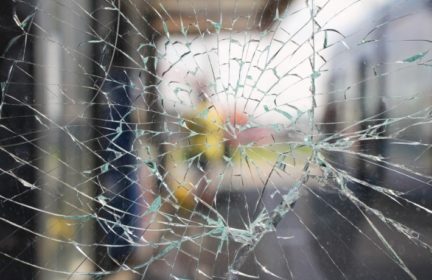