I had to pepper spray a couple of dogs. Here’s how that went

Today, I had to pepper spray a couple of dogs to protect my chickens (and to protect the dogs from the roosters). Long story short, it was effective and there’s a mostly happy ending. It was definitely a happier ending than if I had to shoot them or if a rooster had clawed them.

Check out our guide to the best pepper spray.

I was in my office working on an upcoming guide when my wife burst in and told me there were dogs outside messing with our beagle. I grabbed a gun and ran outside to find two nearly identical, very large dogs looking down at my beagle as she barked her head off at them. They looked like some kind of Collie mix.

I walked up to them and started yelling at them to “git.” They just stood there staring at me. I had the gun trained on them in case they were aggressive, but I saw collars on them and soon realized that they were harmless. Regardless, I still didn’t want them around my dog, and I definitely didn’t want them getting near my chickens.

I kept yelling at them until they finally got the message and took off down the road. But a few minutes they were back, in the woods across from our house.

I was worried they would come around to the other side of my yard and go after the chickens, so I parked my oldest son at the window to stand watch. Having written our guide to pepper spray, I decided that if they came back for the chickens, my can of POM would be a better deterrent than shooting them, and they clearly didn’t respond to verbal commands, so I slipped a can in my pocket.

Sure enough, after a few minutes he started yelling that they were near the chickens. I was sort of prepared, but not enough, slipping my bare feet into my Crocs and taking off running in the snow without a hat or jacket.

I have two chicken tractors, which are just movable wire cages. One has my old ISA Brown hens while the other has my Australorps, including two roosters. The dogs were circling the Australorp tractor and the birds were panicking. They’d knocked their waterer and feeder off their hangers and the hens were bunched up behind the roosters. If the dogs had breached the tractor, I’m not sure which would have had the worst of it: the dogs or the chickens. Those roosters frequently peck and claw at me, and I’m the one who feeds them (and yes, Napoleon, the chickens DO have large talons).

I already had the can of POM in my hand, so when one of the dogs approached me I sprayed it directly in the eyes. Or at least tried to: the wind was blowing a bit so not all of it connected. The dog didn’t seem to respond so I sprayed it again. It apparently took a second to register. After that, the dog’s nose started to twitch and it ran off to just over my neighbor’s property line.

The other dog had hid behind the tractor with the ISA Browns and it was looking for a way into the tractor. I gave it a good spray as well, because I had to make it clear that the chickens are not to be messed with. It learned a bit faster than its sibling and ran off to join it. With both dogs rubbing their noses in the snow, I was satisfied that they would leave the chickens alone.

To cut a long story short, we got in touch with the owner, who understood why I had to spray them, and they brought the dogs home. At least for a minute, before they got away again. I hope they don’t get around the chickens again, because I may have to take more drastic action.

Here’s what I learned from the experience:

1. If you keep a gun for self defense, you should also carry pepper spray. If I didn’t have pepper spray, I would have had to shoot them or hit them with sticks or something, because they clearly weren’t listening to me. I might could have lured them away with treats or meat, but that risked making them return customers.

2. The pepper spray was surprisingly silent. The can made no noise and the dogs didn’t either. I expected yelping or barking or something.

3. I should definitely get a belt holster for the pepper spray so I can keep it at the ready. The can has a pocket clip, but I’m not crazy about carrying it that way.

4. I also should invest in some bear spray. The fog would be more effective against dogs, and we do have the occasional bear sighting now. (Bears are more of an East Tennessee thing, but some have migrated to Middle Tennessee.) 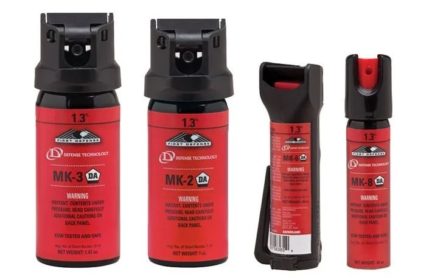